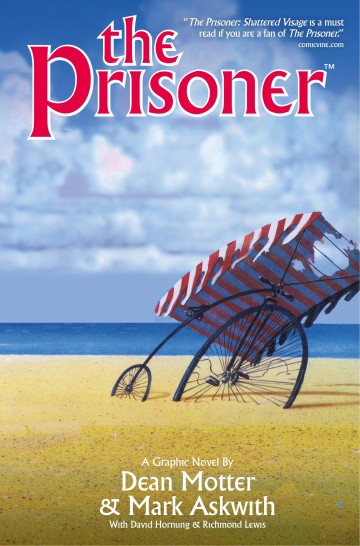 Welcome to the Village… Set twenty years after the final episode of The Prisoner television series, Shattered Visage follows former secret service agent Alice Drake who awakens one day to find herself washed up on the shores of THE VILLAGE, shipwrecked and marooned, following a mysterious storm. In the most derelict and deserted Village she stumbles across the original NUMBER SIX, now an old man, who is still locked into a decades-old conflict with his old nemesis NUMBER TWO. Meanwhile, back in London, conflicting intelligence agencies fight to gain control of The Village, and the deadly secret lying at its very core. Written by Dean Motter (Mr. X, Wolverine, Grendel: Red, White and Black, Will Eisner’s The Spirit and Batman: Black & White) and Mark Askwith (Batman, Justice League International), and drawn by Dean Motter. This is the critically acclaimed, officially authorized sequel to the ground-breaking classic 1960s cult TV show The Prisoner. This collection also includes an introduction written by Abigail McKern, daughter of Leo McKern, who played the role of NUMBER TWO. “Shattered Visage is a fitting sequel to The Prisoner” – Ferretbrain.com “It ‘had me at hello’ and gets my highest recommendation.” – blogintomystery.com “As good at it gets.” – the-night-cruiser-blogspot.com