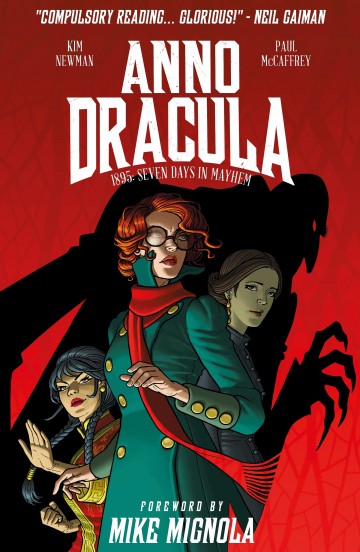 “Exactly what I wanted as a die-hard fan of the novels.” – Comics Alliance For a dark decade, Dracula has ruled the British Empire, unchecked. Now, on the verge of his Tin Jubilee, forces are gathering to challenge his insidious reign. In London, vampire journalist Kate Reed has been summoned to a meeting with the Council of the Seven Days, a secret cabal dedicated to destroying Dracula. Meanwhile, the sinister Lord of Strange Deaths is planning to use the Jubilee celebrations for his own nefarious act of sedition. This album collects together issues #1-5 of Anno Dracula: Seven Days of Mayhem. This all-new adventure written by Kim Newman and drawn by Paul McCaffrey, sees master storyteller Kim Newman’s vast cast of characters explore the terrifying reality of a world ruled by the deadliest vampire of all times. “Compulsory reading… glorious!” – Neil Gaiman