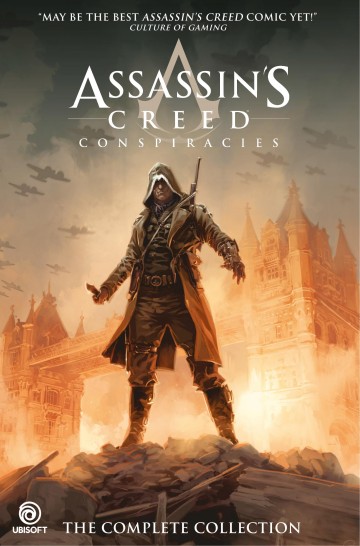 A new era – a new adventure –a new assassin! On the sidelines of the race for the atomic bomb, bereaved East End dockworker Eddie Gorm is thrown into the midst of age-old conflict when he is conscripted into the mysterious Assassin Brotherhood. Tasked with infiltrating the enemy in the hopes of turning the tied of the war, Eddie soon uncovers a plan to create a devastating weapon, which could mean the end of the world as we know it. From Guillaume Dorison, Jean- Baptiste Hostache and Patrick Pion comes this thrilling Assassin’s Creed adventure set during the horrors of WWII! Collects Assassin’s Creed: Conspiracies #1 & 2. “May be the best Assassin’s Creed comic yet!” – Culture of Gaming “With twists and turns and great action, there’s a lot to like in Assassin’s Creed Conspiracies.” – The GWW