Following her philosophy degree, Théa Rojzman underwent training to become a professional psychotherapist. In parallel, she also gained her first experience in comics, putting her artistic skills to use in the making of a family autobiography, together with her father. From that moment on, she has continued to give priority to her creative outlets alongside her daily work. It wasn't long before her books started to pile up, from "Le carnet de rêves" (La Boîte à Bulles, 2009) to "Chacun porte son ciel" (Le Moule à Gaufres, 2012), followed by "Mourir, ça n'existe pas" (La Boîte à Bulles, 2015), which received special mention from the jury for the Prix Artémisia in 2016. She also regularly took part in expositions with her paintings and drawings. She then began to concentrate more on her writing, taking inspiration from her many and varied professional experiences. Her comics and graphic novels cross many genres and age ranges, from children to adults, as she continues to explore impactful themes such as violence and resilience. Her most recent work includes the comics series "Billie Bang Bang" (Le Lombard; Europe Comics in English), alongside artist Steve Baker, relating the misadventures of 8-year-old Billie and her (not quite) imaginary friend Bonkers. 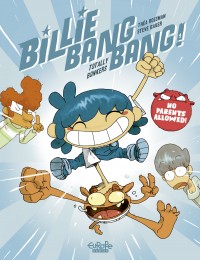