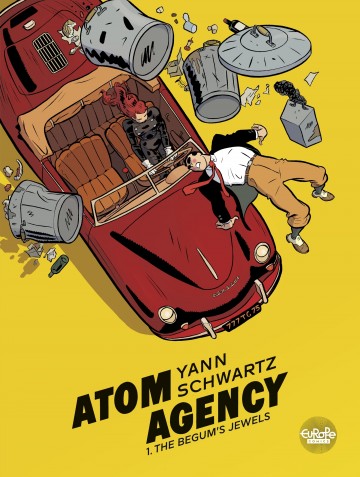 Atom Vercorian is trying to make it as a private detective in post-war Paris, and he just needs that one big case to make a name for himself. His father, a police detective, isn't making any headway in the case of a jewelry theft in the south of France. Atom, however, gets a lead that takes him and his partners, Mimi and Jojo, south to Marseille, where they meet ex-resistance fighters, gangsters, and henchmen. With audacity and enthusiasm, Atom and his cohorts dance their way through the worlds of organized crime, pro wrestling, and the ultra-rich in the pursuit of Miss France 1930's stolen jewels. This could be Atom's big break—if he survives the experience!"If you had to describe to someone a perfect example of a Franco Belgian Bandes dessinée, then you could do a lot worse than pointing in the general direction of Yann and Schwartz's effortlessly cool Atom Agency Volume 1: The Begum's Jewels" Pipedream Comics

Read the album
Add to cart
Added to your cart
V.74 - Lucky Luke
(0)
$8.49
Gold has been found in the Klondike, a remote region in the Canadian far north! Jasper, the manservant of ‘Tenderfoot’ Waldo, went to try his luck … and vanished. Worried about his man, Waldo calls upon his old friend Lucky Luke. The two men will have to make the dangerous trip to the Klondike, only to face all those who, in that desolate, inhospitable land, will stop at nothing in order to fleece their fellow man.
New