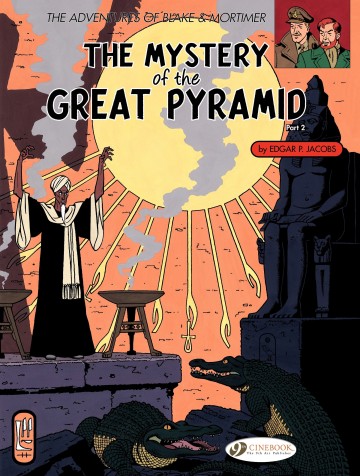 Captain Blake having been assassinated at Athens Airport, Olrik seems to have won the first round. A furious Mortimer swears that he’ll never stop trying to avenge his friend. He goes on the hunt for Olrik, but information is scarce. Sheik Abdel Razek, an old man with mysterious powers, protects him against Doctor Grossgrabenstein’s crew. The doctor is a devoted Egyptologist who has undertaken excavations not far from the Great Pyramid. Strange happenings occur and Mortimer may sometimes feel like he’s losing his way in this investigation that will lead him into the darkest depths of the Great Pyramid.

This digital comic is available in english version. The following reading modes are available with the izneo reader:
New

Read the album
Add to cart
Added to your cart
V.26 - Blake & Mortimer
(0)
$11.99
Mortimer is brought to the camp of General Li Hsi, the Chinese warlord, where he is reunited with a seriously injured Nasir. The professor was kidnapped in order to recover the archaeological proof of the general’s imperial lineage, but also to repair the Red Wing, a formidable combat aircraft Olrik unwittingly delivered. While Blake moves heaven and earth to find him and protect Hong Kong, Mortimer escapes to go in search of the only thing that can save Nasir: a legendary pearl …
eazyComics