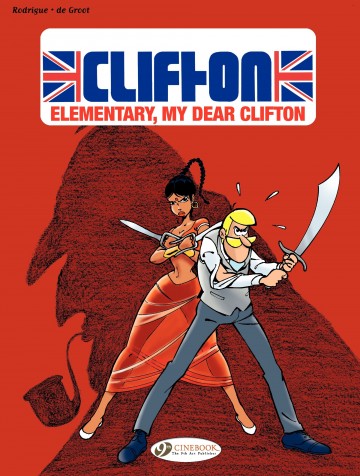 A simple errand that turns into a car accident, and Clifton bangs his head and blacks out. An unfortunate if not uncommon occurrence, even for the dashing colonel – until he wakes up to realise that his passenger, Jade, has vanished! When, the next morning, a mysterious ‘doctor’ calls at his house to tell him a fantastical story, the sceptical Clifton is soon dragged into a very unusual investigation. Oh, and the doctor’s name? Watson. Doctor Watson.

This digital comic is available in english version. The following reading modes are available with the izneo reader:
Clifton- Volume 7 - Elementary, my dear Clifton - Bob De Groot - to read online on izneo or download on your iOS and Android tablet or smartphone.

Read the album
Add to cart
Added to your cart
V.8 - Clifton
(1)
$5.99
Clifton is put in charge of training a young MI5 prodigy. Holidaying in the country, Clifton receives the unexpected – and unwelcome – visit of a MI5 bigwig. He finds himself reinstated against his will, and tasked with finalising the training of a promising new recruit of the Intelligence Service: Sir Jason. The young man is sharp, well- educated, knows both techniques and theory like the back of his hand... The problem, as Clifton soon discovers, is that when the time for action comes, he is inevitably paralysed by fear!
eazyComics

Clifton- Volume 7 - Elementary, my dear Clifton - Bob De Groot - to read online on izneo or download on your iOS and Android tablet or smartphone.
eazyComics

Read the album
Add to cart
Added to your cart
V.72 - Lucky Luke
(1)
$8.99
Marcel Dalton is the Dalton Brothers’ Swiss uncle. He is not only honest, but a banker to boot. Having purchased a small bank in the US, he decides to hire his nephews to force them to make a honest living. Although he’s assisted by Lucky Luke, they have their work cut out for them. Especially since – as if the ingrained instincts of the four dumbest bandits in the West weren’t enough – there’s also the small matter of the competition: a very unscrupulous banker …
eazyComics