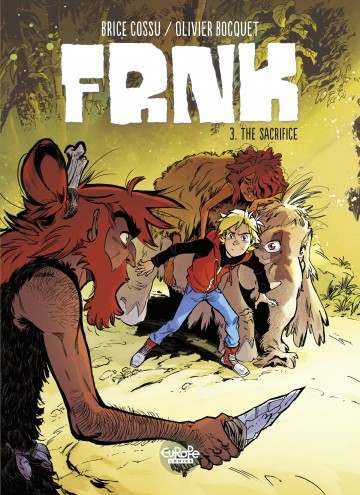 In a world where meat means survival, Frank can't seem to catch a break—or an animal. He just can't bring himself to kill a fellow creature. Just looking into a baby mammoth's big eyes is enough to turn him vegetarian. But while out looking for fruit to eat, he runs afoul of an old nemesis: the wily Leonard, who once stole his Swiss Army knife (and is still puzzling over it). Will Frank's new mammoth friend save him from Leonard's clutches? Will Leonard save them all from the common cold? And just why is their forbidden fruit forbidden?

This digital comic is available in english version. The following reading modes are available with the izneo reader:
FRNK- Volume 3 - FRNK 3. The Sacrifice - Cossu Brice - to read online on izneo or download on your iOS and Android tablet or smartphone.
eazyComics

Read the album
Add to cart
Added to your cart
V.7 - FRNK
(1)
$5.99
Outside a wooden fortress built around the wreckage of a commercial jetliner, Frank, Frank, and Kenza wait in the snow, wondering how to save their friends imprisoned in the cargo hold. The mystery of how an airplane came to crash-land in prehistoric times is intimately intertwined with the mystery of Kenza's past. Will Frank (the kid) and Kenza succeed in rescuing Justine, Gerard, and the gang? Will Frank (the short guy) bring the wrath of the cannibals down upon them? What does all this have to do with an army of snowmen and a flock of quasi-domesticated dinosaurs? Find out in FRNK vol. 7!
eazyComics

Read the album
Add to cart
Added to your cart
V.1 - FRNK
(22)
$5.99
Become a super reader
Write reviews and get comics for free!