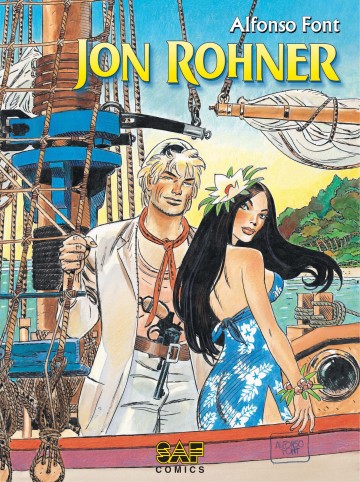 Read an excerpt
$11.99
Add to cart
Added to your cart
Included in the izneo Premium subscription
Learn more about izneo Premium

The end of the 19th century, the twilight of sailing ships, and the picturesque islands of the South Pacific, are the setting for these history-laced adventures. Jon Rohner, a likeable sailor who lives on the edge of the law, tells his stories to Robert Louis Stevenson -- the famed author of such classics as Treasure Island and Dr. Jekyll and Mr. Hyde -- who has settled on the Samoa islands and befriended Rohner. Through Rohner’s stories we are taken into a world full of excitement, action and drama: from his kidnapping a princess to prevent a war between two tribes; to a story about a man who fell in love with a cannibal queen, left his family and got tattooed over his whole body and face; to Rohner’s surviving a tsunami and volcano eruption. The stories -- Rohner’s adventures -- are seemingly in endless supply.

Jon Rohner- Volume 1 - Jon Rohner - Alfonso Font - to read online on izneo or download on your iOS and Android tablet or smartphone.

Read the album
Add to cart
Added to your cart
V.1 - Aloma
(1)
$7.99
Aloma lives and works in Barcelona with her uncle Cyrus, an antiquarian and restorer of works of art of all kinds. In his huge shop, he keeps the last remnants of an old galleon, the Thrill Seeker, in which a few gangsters suspect part of the treasure it once transported. This will put the lives of the protagonists in danger again and again throughout the story. Cyrus and Aloma hire Gerald Quer, a private investigator, to find the treasure, if it really exists. Some traces lead Gerald to Panama, where Aloma wants to sell a Vermeer painting to a millionaire. Gerald decides to accompany her and the suspicion grows in him that Aloma is hiding a very dark secret. But on the island of San Jose, where the Thrill Seeker landed four hundred years earlier, a deadly threat awaits...

Read the album
Add to cart
Added to your cart
Flower of a new World
(4)
$7.99
eazyComics

Read the album
Add to cart
Added to your cart
Dark Stories
(4)
$7.99
eazyComics

Read the album
Add to cart
Added to your cart
Barcelona at Dawn
(2)
$7.99
Close