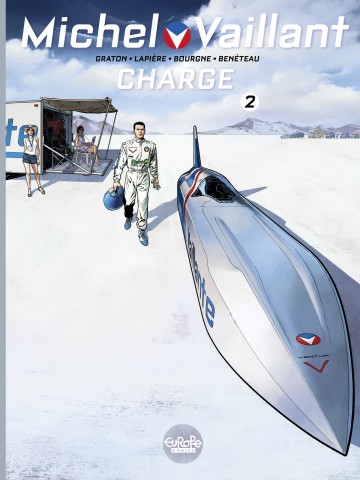 Following the dramatic events on the track in Portimão, Michel Vaillant has been banned from racing until the end of the season. On top of that, he's increasingly worried about his son's involvement in a business that Michel feels is incompatible with their family values. To shake things up a bit, he decides to set himself a new challenge: taking on the land speed record with an electric car at the Bonneville Salt Flats. With the prestige of the Vaillante brand at stake, he's got a lot of pressure on his shoulders. Their sponsors are watching closely, and his father will accept nothing less than success, especially given his distaste for electric cars. It's once again make-or-break for Michel Vaillant.

This digital comic is available in english version. The following reading modes are available with the izneo reader:
Michel Vaillant- Volume 2 - Michel Vaillant 2. Charge - Lapière Denis - to read online on izneo or download on your iOS and Android tablet or smartphone.

Read the album
Add to cart
Added to your cart
V.10 - Michel Vaillant
(0)
$5.99
The Vaillant family seems to have no shortage of mountains to climb. Between developing new racing prototypes and navigating a change in leadership at the head of the company, everyone has their hands full. And that's before Michel decides to take on the biggest mountain of them all: legendary Pikes Peak in Colorado, home to one of the most celebrated and dangerous races in the world, a 14,000-foot climb at breakneck speed. Standing in Michel's way will be his old nemesis, Bob Cramer, who doesn't look too kindly on his French counterpart's attempt to conquer "America's Mountain." It will take all of Michel's grit and expertise to stay the course and come out on top.

Read the album
Pre-order
Added to your cart
V.1 - Michel Vaillant
(0)
$5.99
Become a super reader
Write reviews and get comics for free!

Michel Vaillant- Volume 2 - Michel Vaillant 2. Charge - Lapière Denis - to read online on izneo or download on your iOS and Android tablet or smartphone.

Read the album
Add to cart
Added to your cart
V.3 - Rose
(0)
$5.99
Ever since she was a little girl, Rose has had a special and troubling power: the ability to "double" herself and travel outside her body. Armed with this unique ability, Rose has uncovered long-hidden family secrets and stumbled upon the link connecting a series of mysterious cold cases. Now she's on the cusp of finding her father's murderer. But her most difficult challenge may lie in forgiving... and in letting go.