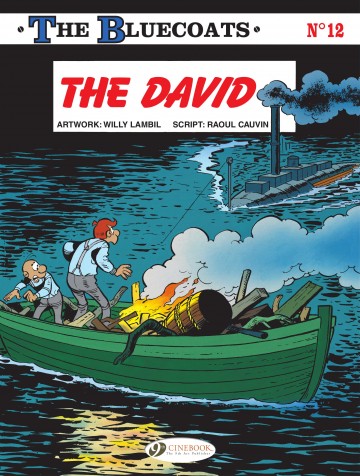 Even as the sea blockade by the Union Navy slowly strangles the South, the picket ships begin to mysteriously blow up one after another. Lincoln, worried that the war could stretch on too long if the Rebels are resupplied, orders that the Confederates’ secret weapon be identified. That means sending spies to Charleston, though, in the heart of the enemy’s territory. And who will be the two unlucky fools the brass entrusts with such a dangerous mission … ?

This digital comic is available in english version. The following reading modes are available with the izneo reader:
The Bluecoats- Volume 12 - The David - Cauvin - to read online on izneo or download on your iOS and Android tablet or smartphone.
Coming soon

Read the album
Pre-order
Added to your cart
V.14 - The Bluecoats
(0)
$5.99
After a series of bloody battles, the 22nd Cavalry is once again depleted. Sent on a recruiting drive, Chesterfield meets only failure – between the reputation of their unit and Blutch’s constant sabotage efforts, finding volunteers is almost impossible. Until fate brings them to a penitentiary where some very unsavoury characters are about to hang. Offered a choice, the criminals will pick the uniform over the noose, but can they be controlled?
eazyComics

Read the album
Add to cart
Added to your cart
V.1 - The Bluecoats
(2)
$5.99
Become a super reader
Write reviews and get comics for free!

The Bluecoats- Volume 12 - The David - Cauvin - to read online on izneo or download on your iOS and Android tablet or smartphone.
eazyComics

Read the album
Add to cart
Added to your cart
V.6 - Cedric
(0)
$5.99
Cedric’s life is a series of triumphs and disasters. If one day he manages to impress his sweetheart Chen, the next his own obsessive jealousy will earn him a mighty slap. He can surprise his parents with tender, generous gestures, then bring them on the verge of a heart attack with his calamitous school reports. As for his grandfather, he’s built along the same lines. The trick is to enjoy the good parts – and weather the rest!
Close