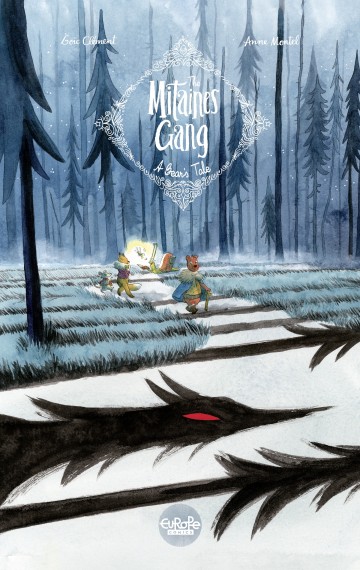 A modern fairytale where five kids (a bear, a snail, a firefly, a mouse and a fox) lead a detective investigation to uncover the mystery of their disappearing classmates. The book starts with a bang - a big bad wolf stalks a little badger, and a couple cases later all that’s left of him is his hat - but no blood on the path, as you’d expect if the wolf would’ve eaten the poor kid. The first disappearance is quickly followed by another, and the tension grows chapter by chapter, as our heroes investigate, find clues, and are unable to stop more of their friends from vanishing. The culprit isn’t any of the obvious suspects, but if you pay attention to all the hints you can reasonably guess who it is way before the reveal. I liked the idea of each animal kid having its own superpower, using it effectively, and making a difference, liked the watercolors-based art style, and liked the story, that’s as much about detective work as it is about making friends and finding your place in the world.

The seemingly idyllic town of Mitaines has been beset by a wave of kidnappings. Strange prints have been spotted in the woods, but there's no sign of foul play. With the authorities baffled, will young Arthur and the rest of the Mitaines Gang be able to solve the crime? More importantly, will they be able to stay out of trouble themselves?

Continue summary
The Mitaines Gang- Volume 1 - The Mitaines Gang 1. A Bear's Tale - Montel Anne - to read online on izneo or download on your iOS and Android tablet or smartphone.
eazyComics

Read the album
Add to cart
Added to your cart
V.2 - The Mitaines Gang
(1)
$8.99
After their last adventure, the Mitaines Gang should be more close-knit than ever as they venture into the professional world! As part of their work experience, they'll learn how to grow flowers, bake cakes, and deliver mail—as well as pick up some major life lessons. But with saboteurs in their midst, not to mention major tensions within the group, the Mitaines Gang are finding their internships more eventful than expected. Can they band together once more?

Read the album
Add to cart
Added to your cart
V.1 - The Mitaines Gang
(1)
$8.99
Become a super reader
Write reviews and get comics for free!

Read the album
Add to cart
Added to your cart
Days of Sugar and Spice Days of Sugar and Spice
(2)
$11.99
Rose is not a happy young woman; she is closed off and angry and she hates her job. But her life changes drastically when she inherits her father's bakery in a small town in Brittany. Returning to a place that brought her both joy and grief forces her to confront painful memories of her past and find the courage to open her heart to a new, happier life that awaits her if she will just let it. A story about new beginnings, filled with small town charm, delicious pastries and the warmth of home and friends.
Close