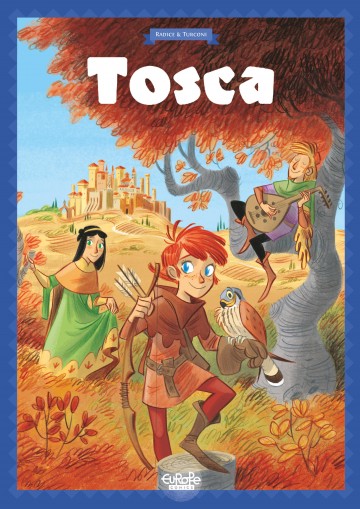 Tosca and Rinaldo are orphans. Ever since their parents died, they have been living hidden in the forest. Lucilla is the only daughter of the Duc di Castelguelfo, famous for his exploits defending the Republic of Siena. Lucilla's parents are too busy to pay much attention to their daughter, who still feels lonely despite being surrounded by an army of maids and servants. But everything changes when she meets Tosca - a mini Robin Hood living a life so different from her own - and their adventures through 14th-century Tuscany begin. In this first volume in the series, they will have to save Lucilla from a fate worse than death: marriage to a man she doesn't want.

Read the album
Add to cart
Added to your cart
V.3 - Tosca
(0)
$5.99
It's been months since the nefarious Gauthier de Brienne had Lucilla taken prisoner. While the captive girl's only companions are boredom and fear, her friends, Tosca and Rinaldo, bravely seek to learn where she's being held. Her father has amassed an army and is laying siege to Florence, yet he dares not act: an attack on his part could spell death for his daughter. His search for her has been no more fruitful than that of her two young friends. Everyone is growing impatient as time drags on and only Lucilla and her captors know her location. The time for action draws nearer...

Read the album
Add to cart
Added to your cart
V.1 - The Forbidden Harbour
(0)
$8.99
During the summer of 1807, off the coast of Siam, a Royal Navy ship rescues a young castaway, Abel, who only remembers his first name. He soon becomes friends with the First Officer, who is standing in for the captain as the commander has apparently run away after stealing the treasures that were on board. Abel goes back to England aboard the Explorer, and he finds accomodation in an inn which is managed by the three daughters of the runaway captain. Abel will find out something truly creepy about himself before recovering his memory, and he'll realize the true nature of the ones who helped him.

Read the album
Add to cart
Added to your cart
V.2 - The Forbidden Harbour
(0)
$8.99
eazyComics