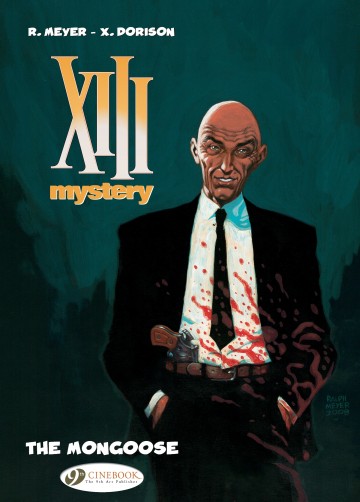 He was XIII’s most dogged enemy from the start, but who really was the Mongoose, that mysterious assassin-for-hire who nearly killed the amnesiac hero so many times? During an encounter between him and Kim Rowland - an event that took place just before the start of the XIII series - the merciless hitman tells the story of his childhood and how he became a contract killer. ‘Anyone would have in my circumstances’, he claims. But would they? You be the judge.

Read the album
Add to cart
Added to your cart
V.11 - XIII Mystery
(0)
$5.99
Jonathan Fly, XIII's official father, was once a respected, famous journalist. Unfortunately, his radical ideas, deemed un-American, led him to be discredited, arrested, and eventually sentenced to jail. Having served his time, he then moved to the small town of Green Falls with his son Jason, who mostly grew up on his own, as his father remained distant, driven by his causes. Until, one day, a powerful man arrived in Green Falls, marking the beginning of a terrible tragedy...

Read the album
Add to cart
Added to your cart
V.1 - XIII Mystery
(2)
$5.99
Become a super reader
Write reviews and get comics for free!

Read the album
Add to cart
Added to your cart
V.4 - IAN
(1)
$5.99
Ian will have to choose a side now – AIs or Humans... A year has passed since the Los Angeles riots, but Ian is still being hunted by the Pentagon. Extremely hostile treatment by the media has also made him a favoured target of a majority of American citizens. Tracked down by an ambitious reporter, the android gets in touch with an eccentric billionaire who promises to tell him what the Nome is – that super-powerful artificial entity with whom he seems to have a mysterious bond... A merciless cascade of new revelations follows...
eazyComics