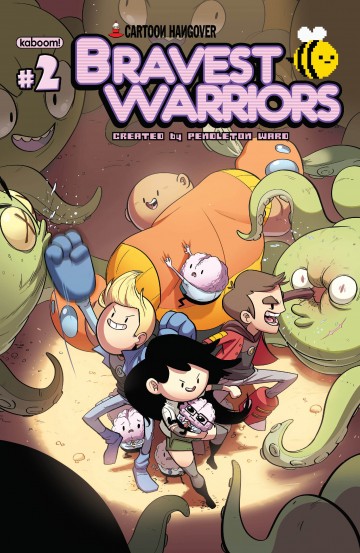 Read an excerpt
$1.99
Add to cart
Added to your cart

POWER! RESPECT! Based on ADVENTURE TIME creator Pendleton Ward's brand new animated series! Join Chris, Wallow, Beth and Danny, four 16-year-old heroes-for-hire, as they warp from galaxy to galaxy, saving alien races with the power of their emotions. They're noble, righteous and totally bodacious! This new series of original comics based on the new series from ADVENTURE TIME creator Pen Ward is sure to be a smash!

This digital comic is available in english version. The following reading modes are available with the izneo reader:
Bravest Warriors- Volume 1 - Bravest Warriors #2 - Pendleton Ward - to read online on izneo or download on your iOS and Android tablet or smartphone.

Read the album
Add to cart
Added to your cart
Bravest Warriors Vol. 3
(0)
$7.99
Catbug is the most dangerous creation in the universe and now it's up to Chris to save the world and Catbug?through punches. It's the tournament everyone has been waiting for-MULTIVERSE BATTLE CHESS BLITZ BLOODBATH! Will our heroes be up to the challenge or is it already too late? Find out in these brand-new missions, written by acclaimed cartoonist Joey Comeau (A Softer World) and illustrated by Mike Holmes (True Story), featuring short stories from Three Word Phrase creator Ryan Pequin.

Read the album
Add to cart
Added to your cart
Bravest Warriors Tales from the Holo John
(0)
$1.99

Bravest Warriors- Volume 1 - Bravest Warriors #2 - Pendleton Ward - to read online on izneo or download on your iOS and Android tablet or smartphone.

Read the album
Add to cart
Added to your cart
Adventure Time: Fionna & Cake
(0)
$7.99
Return to the Land of Ooo with this all-new collection of your favorite stories about best friends of all in Adventure Time ™ —Fionna and Cake! From the most delicious friendship cream puffs to the quest for a perfect fairytale birthday, there’s nothing that Fionna and Cake won’t do for each other! But even when things don’t go as planned, these two best friends will show you there’s nothing stronger than their bong - even if that means adventures into the far off lands full of danger and surprises around every corner. Collects stories from Adventure Time, Adventure Time Comics, Adventure Time 2014 Annual and more!

Read the album
Add to cart
Added to your cart
Adventure Time: Beginning of the End
(0)
$11.99