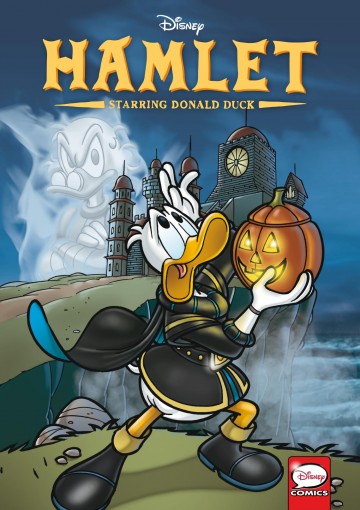 The ghost of a betrayed king appoints Prince Ducklet to restore peace to his kingdom in this adaptation of the classic tragic play by William Shakespeare. Huey, Dewey and Louie, along with Uncle Scrooge, head on a road trip to Denmark, passing by the famous landmark--the phantom castle of Ducksinore! The triplets recall the story of Ducklet, written by the celebrated playwright William Duckspeare. Scrooge's interest is piqued and the story of tragedy, betrayal, and corruption unfolds. Royal life will never be the same for Prince Ducklet when he receives a visit from an apparition of his missing uncle, King Scrooge. The ghost-like figure of his uncle divulges an unsettling truth--that his place as king has been usurped by the conniving Rocklaudius, who now sits on the throne. Through a toxic magic potion used to subdue him, Scrooge has become both invisible and inaudible to everyone but Ducklet--leaving him with the duty of restoring peace to the throne and serving justice to those who have conspired against the King! But between Rocklaudius's henchmen, fresh on his tail, and the constant squabbling of his invisible uncle, will Ducklet restore peace to the castle or find himself another victim of this tragedy?

This digital comic is available in english version. The following reading modes are available with the izneo reader:
Disney Presents- Volume 1 - Disney Hamlet, starring Donald Duck - Giorgio Salati - to read online on izneo or download on your iOS and Android tablet or smartphone.

Read the album
Add to cart
Added to your cart
Disney Treasure Island, Starring Mickey Mouse
(0)
$6.89
Robert Louis Stevenson's tale of swashbuckling adventure comes to life in this adaptation that stars Mickey, Goofy, and Pegleg Pete! For as long as he can remember, Jim Mousekins has dreamed of a life of adventure. His dream is suddenly realized when a mysterious man known only as "The Captain" takes up residence at Jim's family's inn, has the boy on the lookout for "the cat with one hind paw," and tells frightening stories of wild places, disappearances, and the wicked sea-faring pirate, Blot! After finding a treasure map in the captain's wooden chest, Jim, friends, and a hired crew set out on an ocean voyage looking for the island that hides the fortune. But trouble strikes as they reach land: a gang of scheming pirates, hidden among the crew, forces Jim and his friends to flee for their lives! The race is on, as they rush to find the location of the treasure, make it back to the ship, and out to sea--before the pirates capture them and force them all to walk the plank!

Read the album
Add to cart
Added to your cart
Disney A Christmas Carol, starring Scrooge McDuck (Graphic Novel)
(0)
$5.99
All about Lucky Luke!
All about Europe's favorite cowboy!