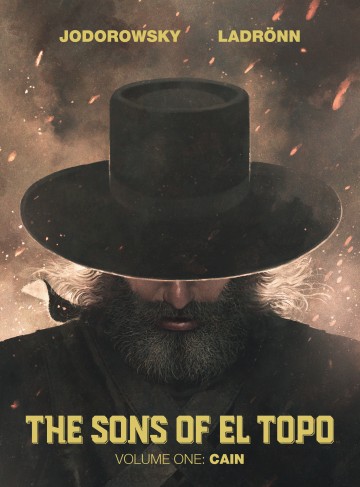 Legendary filmmaker Alejandro Jodorowsky (The Incal, Metabarons) and virtuosic illustrator José Ladrönn (Cable, Incredible Hulk) deliver a sequel to Jodorowsky’s cult classic film, El Topo. El Topo was once a bandit without limits, a man with no moral compass, until his journey through the desert brought him to religion and enlightenment. As he became a holy vessel imbued with the power to perform miracles, he left behind his first born son Cain, and brought forth the birth of Abel. Fueled by resentment, and unable to kill his saintly father, Cain begins the slow pursuit of his half brother in a tale of magic and mayhem.

This digital comic is available in english version. The following reading modes are available with the izneo reader:
The Sons of El Topo- Volume 1 - The Sons of El Topo Vol.1: Cain - Alejandro Jodorowsky - to read online on izneo or download on your iOS and Android tablet or smartphone.

Read the album
Add to cart
Added to your cart
The Sons of El Topo Vol. 2: Abel
(0)
$15.99
The ongoing sequel to cult film, El Topo, from cult-favorite filmmaker Alejandro Jodorowsky. Cain and Abel reunite following the death of Abel’s saintly mother, but the reunion is not without trouble. Cain’s quick to anger and his penchant for hate and violence quickly overcome the brothers already contentious relationship. In a virtuosic journey of untethered magic, corrupted faith, and lust, cult-filmmaker Alejandro Jodorowsky and master illustrator José Ladrönn continue the complex story of two brothers at odds after the death of their saintly father, the legendary El Topo.
Become a super reader
Write reviews and get comics for free!

Read the album
Add to cart
Added to your cart
Megalex - Megalex Vol. 1 - 3 - Digital Omnibus
(0)
$12.99
On Megalex, the city-planet, the laws of nature are prohibited. The tyrannical order reigns over a renewed population controlled by genetic manipulation. Due to the repeated attacks of the neighboring forest, primitive and impenetrable, the urbanized system in command allowed an 'anomaly,' a clone policeman nearly 10 ft tall, to escape. Guided by Adama, one of the rebels fighting for their freedom, the gentle giant manages to join the camp of the 'objectors' and help them go up against the evil powers of Megalex.

Read the album
Add to cart
Added to your cart
The Invisible Cathedral
(1)
$5.99

Read the album
Add to cart
Added to your cart
The Egg of the Soul
(3)
$5.99
eazyComics