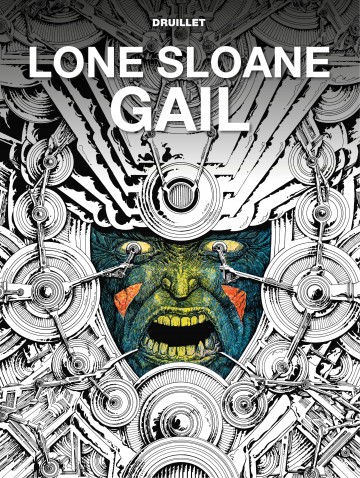 Lone Sloane, the Ulysses of space, cosmic freebooter and galactic rebel, endlessly struggles against dark gods, robotic entities, and alien forces! Separated from his crew in the howling void of space, Sloane is captured and sent to a prison planet, where a mysterious dark entity has malevolent plans for him. Trapped in an alien dimension, warring against the very forces of life and death, Sloane is lost with no chance of escape! Can the ‘red-eyed wolf’ defeat the impossible and reclaim his freedom? Journey into the many-angled mind of comics legend Philippe Druillet as Lone Sloane returns for another unforgettable adventure!

This digital comic is available in english version. The following reading modes are available with the izneo reader:
Lone Sloane- Volume 3 - Lone Sloane - Volume 3 - Gail - Philippe Druillet - to read online on izneo or download on your iOS and Android tablet or smartphone.

Read the album
Add to cart
Added to your cart
V.4 - Lone Sloane
(0)
$37.19
Born from chaos, Prince Yragaël is the last hope for Earth. Gods and demons stroll the land, attempting to enforce their authority on the Last Men once more. But Yragaël is not omnipotent, and falls prey to the queen of Spharain. From their union comes a son, Urm – a grotesque fool with the potential to redeem mankind, or to doom the Last Men forever. Journey into the many-angled mind of comics genius Philippe Druillet, creator of the legendary Lone Sloane! “Philippe Druillet is, and has always been, the master.” – Warren Ellis “Beautiful, mythical and cosmic.” – Nathan Wilson, ICV2

Read the album
Add to cart
Added to your cart
V.1 - Lone Sloane
(0)
$20.49
Become a super reader
Write reviews and get comics for free!