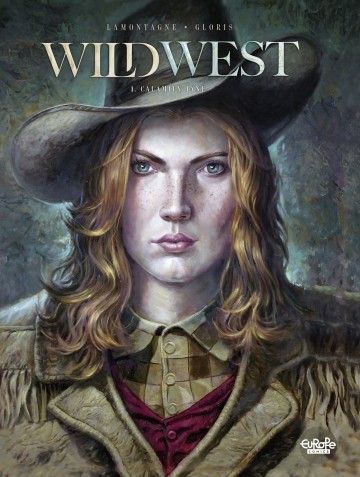 Calamity Jane, the rowdy woman of the West. Famous for wearing men’s attire, an unafraid ability of whiskey-swilling, sharp-shooting, scouting for the Army and her friendship with Wild Bill Hickok. At least, that’s what her own written biography wanted people to remember the myth she had become for, the legend she was very keen to stage and self-promote in the Buffalo Bill’s Wild West Show. Martha “Jane” Cannary’s childhood was kinda rough, her parents’ early departure in life leaving her in charge of five younger siblings as she was about 14, forcing her to cross the state of Wyoming in a wagon despite all dangers. To provide for them, she took all sorts of petty cash type of jobs, one of them consisting of servicing the flesh desire of men. That’s where Thierry Gloris and Jacques Lamontagne imagine with great talent, beautiful illustrations and sharp realism the few months when Martha turned from a servant girl with integrity into a fearless frontier woman. Her own thoughts are quite interesting to follow: “In the Bible, the devil’s not just a name. He lives amongst us. In the souls of men. Lord, have pity on me. God did not create America for usurers, but for men who are free. Unfortunately, God forgot about women when making plans. Like anywhere, women pick up the scraps and take the slaps of these men”. Until, one day, she decides to free herself. Mercilessly.

Wild West, vol 1 is written by Thierry Gloris, with artwork by Jacques Lamontagne. It tells the story of Martha Cannary, aka Calamity Jane. Martha works in a rather seedy establishment, and gets dragged further into a world of prostitution, betrayal and revenge. I liked this book. Gloris tells his story in a straightforward and effective way. It's not too wordy, but still manages to convey the emotions of the characters (especially Martha) in a powerful way. The plot has a few twists and turns, and there's enough drama and action to keep things interesting. The artwork is also nice. Lamontagne seems to relish in all the ingredients of the wild west, and it definitely enhances the read. He delivers a rich portrayal of the settings and events of the story, and it gets pretty visceral at times. Wild West, vol 1 displays a good performance from both writer and artist, and it's an entertaining read about a real historical figure

The westward drive of Americans after the Civil War was unstoppable. For some, the vast territory meant new wealth and new opportunities. The ever-progressing railroads made many rich. Whereas others found their fortune selling the flesh of the less fortunate. In a brothel in Omaha, all manner of destinies intersect in a violent collision that many won't survive. This is the incredible story of Martha Cannary, a young woman who shrugged off what destiny had in store for her and made herself into a legend.

Read the album
Pre-order
Added to your cart
V.2 - Wild West
(0)
$5.99
The Civil War may be over, but fighting rages on as the United States expands to the West. The Native Americans resist this expansion as best they can, often responding to the slaughter of their people with their own waves of violence. Amidst it all, there are cynical men who see only opportunity for profit, selling the guns that accelerate the bloodshed and preying on the vulnerable, be they Native or not. James Hickok, a former Union soldier turned bounty hunter, wants justice more than rewards. And he will not stop until the men who orphaned a young girl get what they have coming—whether at the end of a noose or the end of a gun barrel.