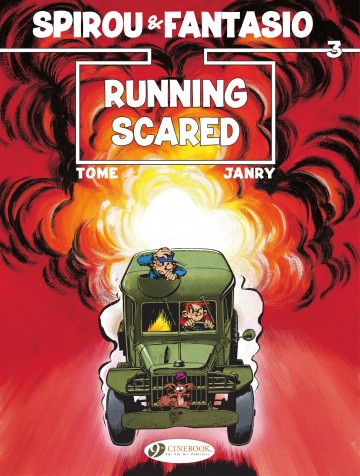 Spirou and Fantasio are hired by a doctor to escort some of his patients. Their ailment? An apparently incurable case of the hiccups. His solution: Send them on the most insane adventure ever and scare the hiccups out of them! Since he offers to pay for their expedition, the two fearless reporters agree to take the patients with them as they attempt to locate two explorers lost in 1938 near the Nepalese border… in the middle of a war!

Read the album
Add to cart
Added to your cart
V.17 - Spirou & Fantasio
(0)
$8.49
Spirou and Fantasio are famous – among other things, as the official discoverers of that legendary creature, the Marsupilami, one of which often accompanies them on their adventures. So when one of their conferences is cancelled in favour of a documentary film from an unknown author, they are understandably irritated… until, that is, they realise the film is the very first to record the family life of wild Marsupilamis!
eazyComics

Read the album
Add to cart
Added to your cart
V.1 - Spirou & Fantasio
(4)
$5.99
Become a super reader
Write reviews and get comics for free!