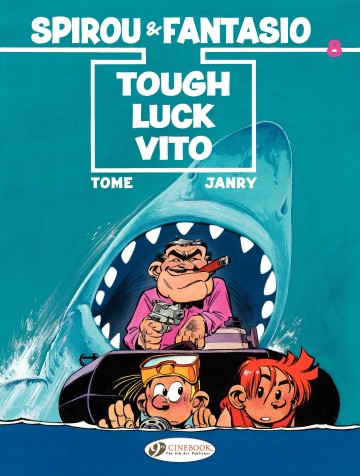 An old seaplane skims the waves over the Pacific. Onboard are Vito Cortizone, former Don of the New York Mafia forced into early retirement by Spirou and Fantasio; Von Schnabbel, unscrupulous pilot; and a mysterious cargo supposed to turn Cortizone’s fortunes around. But the mafioso is cursed with terrible luck, and the plane ends up at the bottom of an isolated island’s lagoon. When two months later a sailing boat arrives, an unrecognisable Vito sees none other than our two adventurer-reporters come ashore!

This digital comic is available in english version. The following reading modes are available with the izneo reader:
Spirou & Fantasio- Volume 8 - Tough Luck Vito - Tome - to read online on izneo or download on your iOS and Android tablet or smartphone.

Read the album
Add to cart
Added to your cart
V.17 - Spirou & Fantasio
(0)
$8.99
Spirou and Fantasio are famous – among other things, as the official discoverers of that legendary creature, the Marsupilami, one of which often accompanies them on their adventures. So when one of their conferences is cancelled in favour of a documentary film from an unknown author, they are understandably irritated… until, that is, they realise the film is the very first to record the family life of wild Marsupilamis!
eazyComics

Read the album
Add to cart
Added to your cart
V.1 - Spirou & Fantasio
(6)
$5.99
All about Lucky Luke!
All about Europe's favorite cowboy!

Spirou & Fantasio- Volume 8 - Tough Luck Vito - Tome - to read online on izneo or download on your iOS and Android tablet or smartphone.
eazyComics