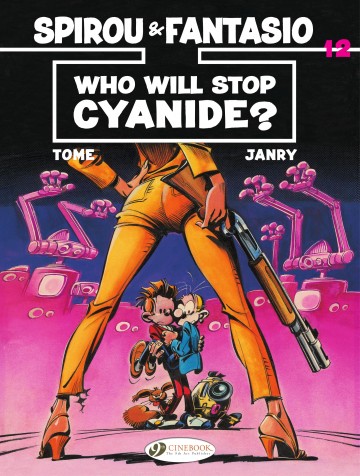 Spirou and Fantasio are hired by a doctor to escort some of his patients. Their ailment? An apparently incurable case of the hiccups. His solution: Send them on the most insane adventure ever and scare the hiccups out of them! Since he offers to pay for their expedition, the two fearless reporters agree to take the patients with them as they attempt to locate two explorers lost in 1938 near the Nepalese border… in the middle of a war!

This digital comic is available in english version. The following reading modes are available with the izneo reader:
Spirou & Fantasio- Volume 12 - Who will stop cyanide ? - Tome - to read online on izneo or download on your iOS and Android tablet or smartphone.
eazyComics

Read the album
Add to cart
Added to your cart
V.18 - Spirou & Fantasio
(1)
$5.99
Over time, Zorglub has become a friend of Champignac, and is no longer the enemy of old. Yet when he comes to see the Count one morning, he uses his deadly Zorglwave on him – the infamous brain- scrambling ray. Two weeks later, Spirou and Fantasio receive a call for help from their old friend: apparently, there are monsters in Champignac! And when our two fearless adventurers reach the outskirts of the village, they are stopped by an Army blockade …
eazyComics

Read the album
Add to cart
Added to your cart
V.1 - Spirou & Fantasio
(6)
$5.99
Become a super reader
Write reviews and get comics for free!

Spirou & Fantasio- Volume 12 - Who will stop cyanide ? - Tome - to read online on izneo or download on your iOS and Android tablet or smartphone.
eazyComics