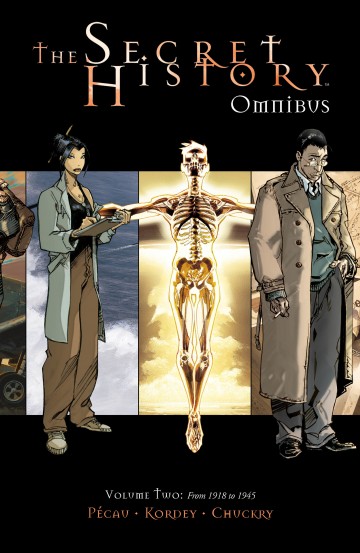 Collects books #8-14 of The Secret History. Past rivalries among the original four Archons must be put aside a fifth unnatural Archon, William of Lecce, tries to either bring the world under his rule or watch as it burns. William's plots and puppets drive the world into the Second World War, and the Archons and their players must risk their lives to stop his plans.

This digital comic is available in english version. The following reading modes are available with the izneo reader:
Secret History- Volume 2 - The Secret History Omnibus Vol. 2 - Jean-Pierre Pécau - to read online on izneo or download on your iOS and Android tablet or smartphone.

Read the album
Add to cart
Added to your cart
V.3 - Secret History
(0)
$10.99
Four immortal brothers and sisters, the Archons, consumed in an epic struggle to influence and shape the history of Western civilization, show us the true, secret, occult history of the world. Volume Three of this ongoing series translated from its original French publication follows Dyo, Reka, Aker, Erlin, and William as they manipulate, destroy, and protect the machinations of the world through the 1940s to the 1970s.

Read the album
Add to cart
Added to your cart
V.1 - Secret History
(0)
$10.99
Our Feel Good Reading List
Comics, Manga & Graphic Novel that will cheer you up :)