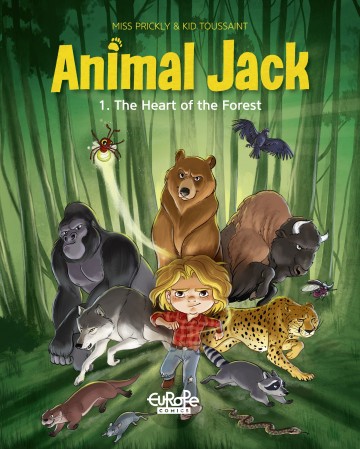 Jack is a typical grade school kid... except that he never speaks a word, is followed everywhere he goes by a flying bug, and can turn into any animal he wants, usually to come to the rescue of his family and classmates. Not everybody appreciates his strange behavior, however. When the town's children start disappearing into the forest, though, Jack's special ability is their only hope. Will Jack ever be understood and accepted by those around him? And will the townsfolk come to see the forest as anything besides a danger and a nuisance?

This digital comic is available in english version. The following reading modes are available with the izneo reader:
Animal Jack- Volume 1 - Animal Jack 1. The Heart of the Forest - Kid Toussaint - to read online on izneo or download on your iOS and Android tablet or smartphone.

Read the album
Add to cart
Added to your cart
V.3 - Animal Jack
(0)
$8.99
When monkeys and apes all over the world start gathering and behaving in increasingly alarming ways, Jack and his friends must embark on a whirlwind trip around the world to get to the bottom of it all. Their mission: to locate the missing Ape-God in order to put an end to the chaos—as well as the destructive actions of humankind that led to these problems in the first place. Luckily, Jack has his own personal flying dragon to help him get around! Another exciting and magical adventure is in store, where young and older readers alike will learn about fascinating animals they never even knew existed!

Read the album
Add to cart
Added to your cart
V.1 - Animal Jack
(1)
$8.99
Become a super reader
Write reviews and get comics for free!

Animal Jack- Volume 1 - Animal Jack 1. The Heart of the Forest - Kid Toussaint - to read online on izneo or download on your iOS and Android tablet or smartphone.
Coming soon

Read the album
Pre-order
Added to your cart
V.4 - Magic 7
(0)
$5.99
Leo, the spiritualist, is spending his vacation at his father's house. In the library, he finds books that delve into the secret origins of the mages, shedding light on their incredible powers, as well as their weaknesses... The truth might be a hard pill to swallow, but this knowledge will prove crucial for the seven friends as they prepare to confront... the beast!
eazyComics