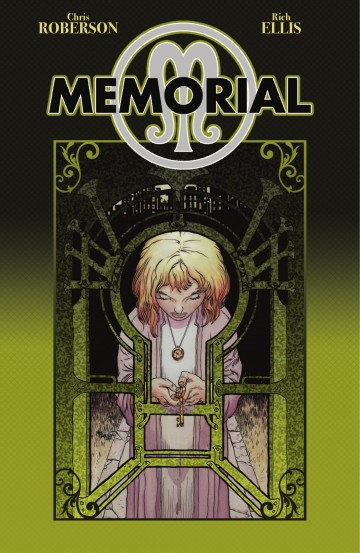 New York Times best-selling author and Eisner-nominated creator of iZombie, Chris Roberson, delivers a magical new ongoing series. With art by the fantastical Rich Ellis, and covers by the legendary Michael WM Kaluta. MEMORIAL is the story of Em, a young woman who arrives at a hospital in Portland, Oregon with no memory of her past. A year later, she has managed to rebuild her life, finding a job and friends, when her existence is thrown into turmoil after she inherits a magical shop, the kind that appears in an alley one instant and disappears the next. Em finds herself drawn into a supernatural conflict between immortal beings representing the fundamental aspects of the universe itself. All of existence is at stake, and the only things standing in the way of total oblivion are Em, the magical shop, and a talking cat.

Memorial- Volume 1 - Memorial - Chris Roberson - to read online on izneo or download on your iOS and Android tablet or smartphone.
New

Read the album
Add to cart
Added to your cart
V.2 - Witchfinder
(0)
$14.99
Collect the occult adventures of Sir Edward Grey, otherwise known as Her Majesty’s Witchfinder! Discover a nest of vampires, brave a technological “gate” to another realm, and track down the truth behind Jack the Ripper in this collection of three intense adventures of Sir Edward Grey. As the Queen’s personal “Witchfinder,” Grey continues to pursue the occult goings on in London and beyond. But this time the events he encounters—and the things he learns—will lead him to question his very future. Complete your Witchfinder omnibus library with this second volume, featuring the writing of Mike Mignola and Chris Roberson, with art from Ben Stenbeck, D’Israeli, and Christopher Mitten and stunning colors from Michelle Madsen and Dave Stewart. Collects Witchfinder TPB volumes 4-6.