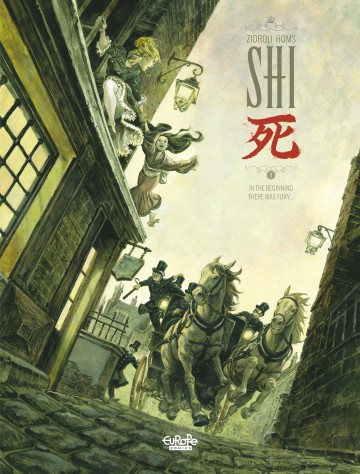 “In the beginning, there was fury”. Shi is the Kanji symbol of death. It is also the signature of a criminal organisation, a nebula solely made up of women, a secret society of angry mothers and revenge-seeking petticoat vigilantes. In modern day London, Lionel Barrington, the CEO of a smart anti-personnel mine producing company, faces justice two ways: the Court of Appeal dismisses a lawsuit trying to hold him responsible for the death of a young boy just hours before his own child and pregnant wife step on hidden mines in their garden. Had Barrington not just publicly denied the responsibility of the tree of knowledge for what Eve did with its apples? In 1851, Queen Victoria’s husband, Prince Albert, and Henry Cole initiated the showcasing of Britain to an international audience through the ambitious Great Exhibition of the Works of Industry of All Nations (true historical fact). Jennifer Winterfield, a young, beautiful, strong and independent-minded aristocrat crosses the desperate path of a traumatised Japanese model holding her dead baby .. and displaying a fascinating dragon tattoo. A bond like no other will see the two women defy the authority of Henry Cole and the Winterfield alpha males, the latter having pledged to work for the supremacy of the British Empire through the heavy consumption of “exotic” pleasures. The bond between the unlikely pair will rise so strong that their unrelenting hatred of the Establishment will rattle the British Crown for years. Two women against an Empire.

SHI, vol 1 is written by Zidrou, with artwork by Homs. An attack against a present day weapons manufacturer traces back to Great Britain in 1851, where a peculiar Japanese woman appears on the first Great Exhibition. I liked this book. It definitely has an innovative idea and subject matter. The dialogue is also very good, Zidrou clearly has a great talent for language. The story flows along at a steady speed, although it takes a little to long to get to the final point of the book. The pace stagnates from time to time, but that's not a major problem overall. Homs artwork is very good. It's full of life and emotion, and it's hard to stay indifferent when looking at the pages. The art really pulls out all the stops when it comes to telling this story in a powerful way. SHI, vol 1 offers up a good start to this series, surely the creators has a lot more in store for future volumes.

During the 1851 Great Exhibition in London, two women's lives become irrevocably intertwined when they both fall victim to a nefarious underground fraternity of ex-soldiers from England's upper crust who have sworn their lives to defending the British Empire—as well as their own decadent lifestyles. In this first volume, young rebel Jennifer Winterfield and the mysterious Kitamakura from Japan forge an unlikely alliance along with Jennifer's doctor uncle and a street urchin named Pickles. Together they lay the groundwork for a criminal organization that will go on to sow terror in the hearts of the colonialists and industrialists who tried to put them down.

Continue summary
SHI- Volume 1 - SHI - Tome 1 - In the Beginning there was Fury - Zidrou - to read online on izneo or download on your iOS and Android tablet or smartphone.

Read the album
Add to cart
Added to your cart
V.4 - SHI
(3)
$5.99
In this final volume, Kita and Jay plot their ultimate revenge against the "Glorious Eries," the secret cabal of Royalists that's seeking to take back the newly independent American colonies with the covert help of Queen Victoria herself. Meanwhile, the ruthless police commissioner Kurb is on their trail and finds unexpected and unwitting help from the street urchin Pickles. Jay's family continues to come apart but her estranged mother makes one last attempt to reach out to her. Everything is set in motion now: can anyone change the course of events, or is it too late?

SHI- Volume 1 - SHI - Tome 1 - In the Beginning there was Fury - Zidrou - to read online on izneo or download on your iOS and Android tablet or smartphone. 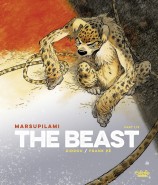 Read the album
Add to cart
Added to your cart
V.1 - Marsupilami: The Beast
(3)
$11.99
Belgium, 1955. A mysterious animal is caught in the jungles of South America and transported to Europe on a cargo ship, where it ends up starving and half-dead on the outskirts of Brussels. François, a young boy with a fondness for taking in strays, finds it and brings it home to his mother and his menagerie—his best and only friends. As the son of a departed German soldier, François is the favorite target of every bully in school. Nobody can identify the strange creature with the voracious appetite and the stupendously long tail, and François figures his new pet is perfect for show-and-tell... But with a wild beast and a small classroom, things quickly get out of hand. Will this spell the end for François's new animal friend? The real story of the legendary Marsupilami!