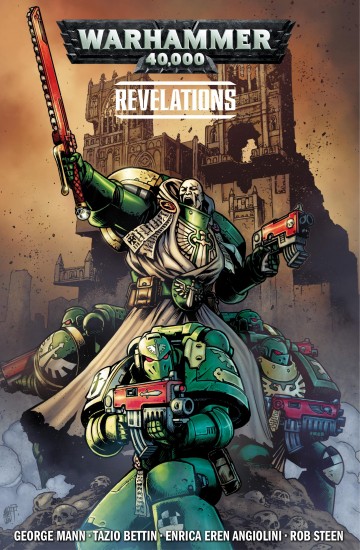 “For newcomers and fans of the 40K universe alike!” – Adventures in Poor Taste “Non-stop action and adventure galore!” – Reading With a Flight Ring After the deadly events of Exyrion, Baltus and his fellow Dark Angels have little time for reflection before the focus of the war shifts to the planet Quintus. There, Eldar Harlequins have arrived in search of ancient Spirit Stones – but a stirring Necron tomb threatens to open up a battle on two fronts! While their battle brothers – and the incautious Inquistior Sabbathiel – fight for survival, Baltus and Interrogator Chaplain Altheous journey to a distant space hulk, aboard with time moves in unsettling directions, Chaos stalks in every shadow, and revelations of long-buried secrets abound… Writer and Black Library contributor George Mann, artist Tazio Bettin and colorist Enrica Eren Angiolini return for the second arc in this acclaimed series. Collects Warhammer 40,000 #5-8.

This digital comic is available in english version. The following reading modes are available with the izneo reader:
BLACK FRIDAY IS HERE!
Thousands of volumes on sale!

Read the album
Add to cart
Added to your cart
V.1 - Newbury & Hobbes
(0)
$13.99
A foul plot unfolds from the depths of London, as bombs rock the city, the dead rise, and Her Majesty is not amused! Discoer the dynamic detective duo Sir Maurice Newbury and Miss Veronica Hobbes, defenders of the Victorian Empire against threats both natural and supernatural. The HIT steampunk mystery novels unleash a new tale by original creator George Mann (‘Doctor Who’, ‘Dark Souls’) with irrepressible illustrations by Dan Boultwood (‘It Came!’, ‘The Phoenix’). Plus, exclusive Newbury & Hobbes prose story! Collects Newbury & Hobbes #1-4. “There is no doubting the talent on show in this book. Fans of Doctor Who or Holmes should find enough to quench their thirst.” – Comic Crusaders “Fans of Alan Moore’s work will enjoy Mann’s description of Victorian asylums, slums, aristocratic soirees and things that go bump in the night.” – Strange Horizons