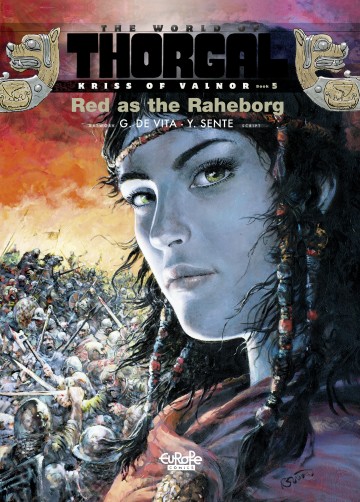 The time has come for the great battle. The armies of Emperor Magnus have marched from the south, bent on converting their adversaries to the worship of their god by any means necessary. Rising up against them are the combined forces of Kriss and her new husband, King Taljar... whose identity will finally be revealed. The survival of the Northmen will rest on their courage, their loyalty, and the powers of their king and his lieutenants—as well as the bravery of their queen.

This digital comic is available in english version. The following reading modes are available with the izneo reader:
Kriss of Valnor- Volume 5 - Kriss of Valnor 5. Red as the Raheborg - De Vita - to read online on izneo or download on your iOS and Android tablet or smartphone.
eazyComics

Read the album
Add to cart
Added to your cart
V.5 - Kriss of Valnor
(1)
$5.99
Become a super reader
Write reviews and get comics for free!

Kriss of Valnor- Volume 5 - Kriss of Valnor 5. Red as the Raheborg - De Vita - to read online on izneo or download on your iOS and Android tablet or smartphone.

Read the album
Add to cart
Added to your cart
The Revenge of Count Skarbek The Revenge of Count Skarbek - Omnibus Edition
(1)
$8.99
1843, Paris. A sensational trial stuns the art world and has the streets of the capital buzzing. Is the famous art dealer Daniel Northbrook nothing but a swindler? Count Skarbek, a rich Polish businessman, will do everything he can to prove it, revealing a sensational tale of love, hatred, passion, and revenge. A gripping thriller in the vein of the great popular fiction by Hugo and Dumas. Includes a new preface from scriptwriter Yves Sente and exclusive extra content from artist Grzegorz Rosinski (for mature readers only).