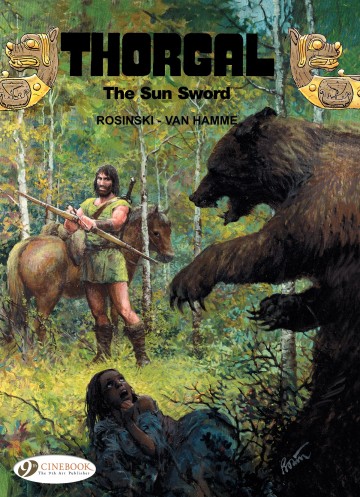 A wandering Thorgal is captured and enslaved by Orgoff, a cruel man who appointed himself the local lord after defeating the old one. Orgoff wields the dreadful power of the Sun Sword, which the peasants say makes him invulnerable. Thorgal, of course, is not convinced. Escaping, he encounters the last of the rebels against the new order—and an old enemy. Together, they will have to defeat Orgoff and his allies and recover the Sun Sword.

This digital comic is available in english version. The following reading modes are available with the izneo reader:
Thorgal (Cinebook)- Volume 10 - The Sun Sword - Jean Van Hamme - to read online on izneo or download on your iOS and Android tablet or smartphone.
Coming soon

Read the album
Pre-order
Added to your cart
V.27 - Thorgal (Cinebook)
(0)
$5.99
Thorgal has failed. Despite all his efforts, he wasn’t in time to save his son Aniel, and was forced to look on as sorcery transformed the young, mute boy into a teenager with terrible powers – the reincarnation of the Master of Red Magic. The Viking, convinced there is still a chance, is still not ready to give up. But many threats are converging, from within the city and from afar, and the stakes may be much higher than he imagines …

Read the album
Add to cart
Added to your cart
V.1 - Thorgal (Cinebook)
(28)
$5.99
Thorgal (Cinebook)- Volume 10 - The Sun Sword - Jean Van Hamme - to read online on izneo or download on your iOS and Android tablet or smartphone.
eazyComics

Read the album
Add to cart
Added to your cart
Thorgal Vol. 0 - The Betrayed Sorceress
(0)
$8.99
The first two volumes of the adventures of Thorgal, published in 1980, translated into English at last in this retroactively numbered double volume. Thorgal’s coming-of-age is painfully similar to the rest of his life: the young man finds himself tied to the stone of sacrifice by Gandalf the Mad, king of the Vikings of the North and father of his beloved Aaricia. There, the Child of the Stars can do nothing but wait for the coming tide – and death. Until, that is, a mysterious sorceress with flaming red hair comes to offer him a deal: his life, and revenge, for one year in her service.
All about Lucky Luke!
All about Europe's favorite cowboy!

Thorgal (Cinebook)- Volume 10 - The Sun Sword - Jean Van Hamme - to read online on izneo or download on your iOS and Android tablet or smartphone.

Read the album
Add to cart
Added to your cart
V.3 - Authorised Happiness
(0)
$5.99
Superintendent Carelli is getting old, and has already lost most of his illusions. But a routine case catapults him into the middle of a profound mystery: a young girl with no official existence gives him a photograph of a group of people … who don’t exist either! As he doggedly digs deeper despite the pressure, obstacles and threats that soon pile against him, he comes across a terrible secret that threatens the very foundations of his world …
eazyComics