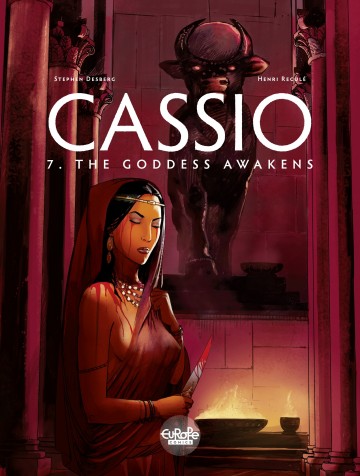 Archeologist Ornella Grazzi doesn't know what to expect when she finally meets with the mysterious man who's summoned her to Paris. Billionaire Jon Vegham seems to be playing a complicated game of cat and mouse with her as he doles out clues not only about Ornella's mother and her death from cancer, but also about Cassio, the potentially immortal Roman whom mother and daughter alike were researching. Meanwhile, in ancient Rome, new information about Cassio's own mother, the goddess Armahl, brings him into conflict with his lover, the beautiful priestess Oasis, and his nemesis, the vengeful Egyptian priest Reptah.

This digital comic is available in english version. The following reading modes are available with the izneo reader:
Cassio- Volume 7 - Cassio 7. The Goddess Awakens - Desberg Stephen - to read online on izneo or download on your iOS and Android tablet or smartphone.

Read the album
Add to cart
Added to your cart
V.9 - Cassio
(3)
$5.99
In this riveting series finale, Tesio, the prophesied child of two ancient Egyptian deities, has recovered his mother's body from the Louvre and wrested the fourth canopic jar from the convent at Monsarmat, leaving a bloody trail of corpses in his wake. Only one man stands any chance of stopping his mad rise to power: his half-brother Cassio. But since Tesio's poison has stripped him of his immortality, Cassio's going to need a lot of help. From the beautiful young archeologist Ornella Grazzi; from his recently resurrected mother, the goddess Armahl; and from the unlikeliest of sources: his mortal enemy, the monstrous Reptah.

Read the album
Add to cart
Added to your cart
V.1 - Cassio
(9)
$5.99
All about Lucky Luke!
All about Europe's favorite cowboy!

Cassio- Volume 7 - Cassio 7. The Goddess Awakens - Desberg Stephen - to read online on izneo or download on your iOS and Android tablet or smartphone.

Read the album
Add to cart
Added to your cart
V.2 - The Lion of Judah
(0)
$5.99
Ostracized from society after committing a gruesome and seemingly unmotivated double murder, John Wallace has lost his fiancée and his future. But even a man with nothing left to lose has something left to fear: Naisha, the witch who wants him dead. On the run after breaking out of prison, Wallace joins a hunting party as a guide, but only to get closer to the highlands of Lake Tana, where a former fellow inmate claimed a treasure was hidden. Wallace plans to use it to beat his retreat from Africa... but will his hopes be dashed?