V.3 - Children of the Resistance 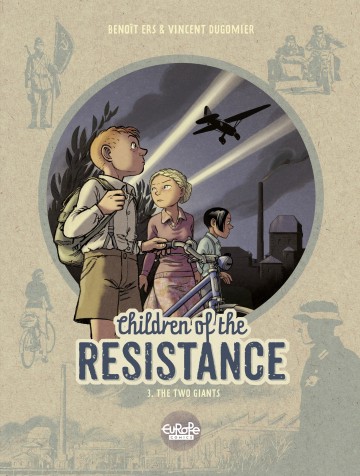 More determined than ever to fight against their German occupier, 14-year-old François and his friends team up with a British spy who sends them on increasingly dangerous missions. Meanwhile, the war itself intensifies as the USSR and the U.S. join forces to fight the Nazis, and the children try to figure out what the various political parties are about, and what will be at stake when the war is over. In France, antisemitism continues to grow, and the Communist Party launches the first armed attack against the occupying forces.

Read the album
Add to cart
Added to your cart
V.6 - Children of the Resistance
(0)
$5.99
As François and his friends continue to carry out their usual Resistance activities, a threatening new law is announced: young Frenchmen would now be sent to work in the factories of Nazi Germany, whose own young men were now deployed in battle across the continent. This provides a new challenge for our young heroes, but also an opportunity to encourage the French to engage in civil disobedience and to recruit new members for the Resistance.

Read the album
Add to cart
Added to your cart
V.1 - Children of the Resistance
(2)
$5.99
Become a super reader
Write reviews and get comics for free!

Read the album
Add to cart
Added to your cart
V.1 - Urbex
(1)
$5.99
School friends during the day, Alex and Julie meet in secret at night to enjoy a little urban exploration. Deserted villas, forgotten clinics, and derelict factories are their favorite playgrounds. But one night, their exploration becomes a nightmare when they come face to face with the ghosts of two young girls in an abandoned mansion. Alex and Julie are certain about one thing: they can see the dead. But what if they're also able to heal the wounds of the past...?