V.5 - Children of the Resistance 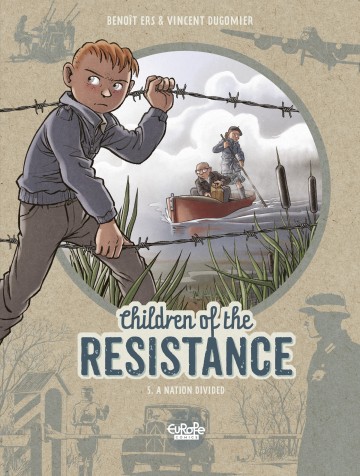 France has been under occupation by Nazi Germany for over two years now, and the French population is suffering under shortages, forced transfers to factories in Germany, constant propaganda, conflicting political views, and the brutal presence of a new pro-Nazi French militia. Nevertheless, hope remains alive as German troops are experiencing their first major defeats, and the Resistance network keeps growing. Communication with London is steadily improving too as radio operators risk their lives to transmit from inside the Occupied Zone. The children's new mission is to help these operators get their coded messages to the Allies... Easier said than done!

Volume : 5/6 - Children of the Resistance 5. A Nation divided

Read the album
Add to cart
Added to your cart
V.6 - Children of the Resistance
(0)
$5.99
As François and his friends continue to carry out their usual Resistance activities, a threatening new law is announced: young Frenchmen would now be sent to work in the factories of Nazi Germany, whose own young men were now deployed in battle across the continent. This provides a new challenge for our young heroes, but also an opportunity to encourage the French to engage in civil disobedience and to recruit new members for the Resistance.

Read the album
Add to cart
Added to your cart
V.1 - Children of the Resistance
(2)
$5.99
Become a super reader
Write reviews and get comics for free!

Read the album
Add to cart
Added to your cart
V.1 - Urbex
(1)
$5.99
School friends during the day, Alex and Julie meet in secret at night to enjoy a little urban exploration. Deserted villas, forgotten clinics, and derelict factories are their favorite playgrounds. But one night, their exploration becomes a nightmare when they come face to face with the ghosts of two young girls in an abandoned mansion. Alex and Julie are certain about one thing: they can see the dead. But what if they're also able to heal the wounds of the past...?