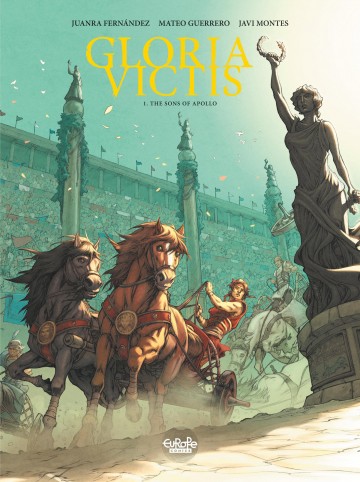 There was a time when certain mortals could become gods. At this time, two thousand years ago, men would pass into legend by risking their lives to entertain the crowds; famous charioteers who, perched on their chariots like Apollo, would fight for their lives and their honor in the arena. This is the story of one of those heroes: Aelio Hermeros, perhaps one of the greates chariot riders of all time. He was a mortal immortalized in the memory of those who saw him compete, who witnessed his defeats, his victories, his blood spilled and, most of all, his glory.

Read the album
Add to cart
Added to your cart
V.4 - Gloria Victis
(0)
$5.99
The shadow of Nemesis weighs heavily upon Aelio as he rides North. There, far from his native soil, he will have to take part in the most dangerous race of his life. This is the price he must pay to restore glory to his name... and to have his revenge.
eazyComics

Read the album
Add to cart
Added to your cart
V.1 - Jakob Kayne
(0)
$5.99
Jakob Kayne and his brother Samuel are the last of the Hippocrats. Sworn to treat those in need (and those who are deemed worthy), the two Healer-Alchemists have been tracked across the Archipelagos by manifold enemies, including the Inquisition. On his latest mission, Jakob, a formidable Memory-Eater whose face none can recall, is confronted by an obstacle as unexpected as it is persistent: feelings for his latest patient, Victoria Marcheda, amid the fiery destruction of the city of La Isabela.
Close