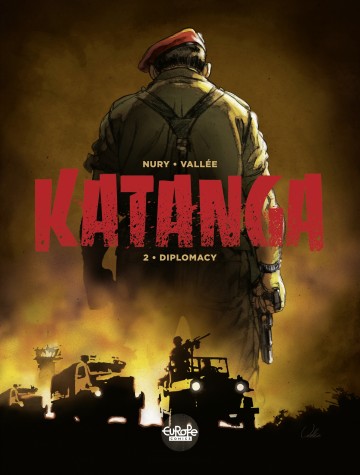 Minister Munongo is onto the wily Orsini and his scheme to fence $30 million in missing diamonds to a Belgian mining executive. The pressure's on in the Katangan capital, forcing the cunning former spy to use every last trick up his sleeve just to survive. But out in the jungle, things aren't any better for Cantor and his mercenary crew. Their diplomatic mission—a cover to get the diamonds—takes them ever deeper into hostile tribal territory. In the crucible of violence, character is revealed. In this second volume, Nury and Vallée display a masterful understanding of the villainous psyche.

This digital comic is available in english version. The following reading modes are available with the izneo reader:
Katanga- Volume 2 - Katanga 2. Diplomacy - Vallée Sylvain - to read online on izneo or download on your iOS and Android tablet or smartphone.

Read the album
Add to cart
Added to your cart
V.3 - Katanga
(4)
$8.99
Charlie and Cantor have the diamonds, and the beginnings of a wary friendship. Forthys has the money and Alicia. And Armand Orsini's got one hell of a grudge, plus a lumbering ex-Nazi goon named Gunther. The UN Mission to Katanga has declared a state of siege pending a manhunt for missing independence leader Patrice Lumumba, believed a victim of shady government manipulations. It won't be easy for our three pairs of schemers to converge on Albertville, and what awaits them there? The planned handoff? Or a sudden, bloody showdown? Love, tragedy, and amorality: the thrilling series conclusion has it all.

Katanga- Volume 2 - Katanga 2. Diplomacy - Vallée Sylvain - to read online on izneo or download on your iOS and Android tablet or smartphone.

Read the album
Add to cart
Added to your cart
V.1 - The Man Who Shot Chris Kyle: An American Legend
(2)
$8.99
A former Navy SEAL and Iraq War veteran, Chris Kyle is the most lethal sniper in American military history. His autobiography, American Sniper, was a best-seller in the US. On February 2, 2013, Chris Kyle is killed by another veteran, Eddie Ray Routh. The murder takes place on a shooting range in Stephenville, Texas. But that's only the beginning of their story.