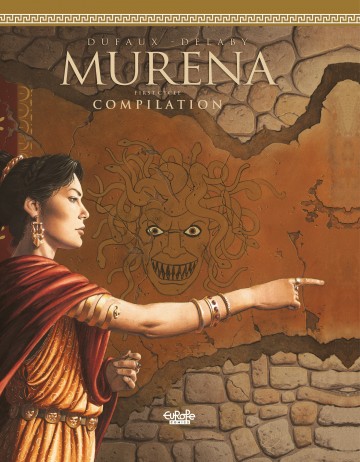 Ancient Rome has always been a fascination for many story writers and filmmakers. Not always for the best though. Murena is a superb rendition of the era with a great story by Jean Dufaux, one of the most talented and most prolific writers in Bande Dessinee. If one refers to movies, the whole series is fortunately much closer to Gladiator than to Italian peplums of the fifties. Here is a compilation, bundling the four first albums of the series that make up the initial cycle called « the cycle of the mother ». It contains no less than 216 pages packed with action, violence and, as one would expect, betrayal and lust for power. The story begins in Rome during the reign of Emperor Claudius before Nero’s accession to power and, through Lucius Murena’s eyes, we attend to Agrippina’s dark intrigues. Delaby’s uber-realistic artwork is breathtaking ; his classic graphics depict very detailed and documented backgrounds as well as a superb cast of characters including a gallery of magnificent villains. Thanks to the already much lauded qualities of this historical epic, one is taken by the plot and by the action. No need to be a fanatic of the Roman Empire ; just get prepared for some occasional graphic sexual depiction and violence.

We find ourselves in Ancient Rome. In the intense heat of the centre of one of the most far-reaching empires the world has ever known, gladiators struggle for survival in the arena, cunning merchants strive to outwit each other, sordid love affairs turn sour, and along side it all, the eternal game of power plays out in the shadows...

Read the album
Add to cart
Added to your cart
Vincent: A Saint in the Age of Musketeers
(2)
$8.99
eazyComics