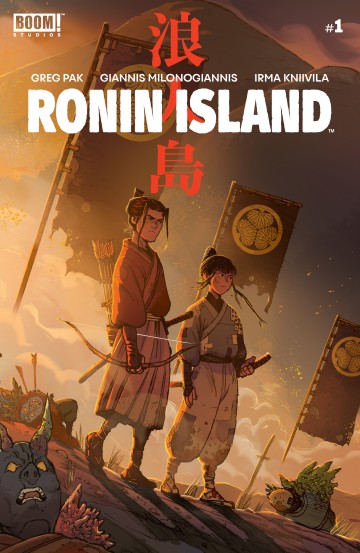 After a mysterious attack wipes out the major cities of 19th century Japan, Korea, and China, survivors from all three lands find refuge on a hidden island and build a new society. Hana, the orphaned daughter of Korean peasants, and Kenichi, son of a great samurai leader, have little in common except for a mutual disdain for the other. But these young warriors will have to work together when an army invades the island with shocking news: there is a new Shogun and the Island is expected to pay fealty in exchange for protection from a new enemy...a mutated horde that threatens to wipe out all humanity. Award-winning writer Greg Pak (Firefly, Mech Cadet Yu) and artist Giannis Milonogiannis (Prophet) present a story that examines how we move forward when our past divides, set against the backdrop of a post-disaster 19th century Japan.

This digital comic is available in english version. The following reading modes are available with the izneo reader:
Ronin Island- Volume 1 - Ronin Island #1 - Greg Pak - to read online on izneo or download on your iOS and Android tablet or smartphone.

Read the album
Add to cart
Added to your cart
V.3 - Ronin Island
(0)
$11.99
The New York Times best-selling author Greg Pak (Firefly, Agents of Atlas) and artist Giannis Milonogiannis (Old City Blues) present the final chapter of the critically-acclaimed series, as new heroes are forged and legends are born. Hana and Kenichi finally return to the island seeking refuge, but are denied entry by Elder Jin and the Islanders who fear the newly mutated byōnin. Caught between the Island’s defenses, the Shogun’s oncoming forces, and the deadly new monsters, Hana and Kenichi must rally their own troops and make one final stand to protect the homeland that has abandoned them, in order to preserve the ideals they know are right and fight for the future they want. Collects Issues #9-12.

Read the album
Add to cart
Added to your cart
V.1 - Ronin Island
(0)
$11.99
Ronin Island- Volume 1 - Ronin Island #1 - Greg Pak - to read online on izneo or download on your iOS and Android tablet or smartphone.

Read the album
Add to cart
Added to your cart
C.17 - Ronin Island
(0)
$3.99
As the battle dust clears, the Island will never be the same. The world beyond their waters is a dangerous place, and it’s up to Hana and Kenichi to make one final decision, one that will shape the future of their home forever.

Read the album
Pre-order
Added to your cart
C.33 - Firefly
(0)
$3.99
What happens when your worst enemy becomes your only ally? With her sights set on freeing Leonard, Kaylee’s team chases the Jefa across the Earth That Was only to be led directly into a trap. But everything changes when they get attacked by plunderer robos who have been tracking both groups… to exterminate them all. Now, Kaylee must team up with the Jefa in order to fend off the robos. But if they survive this, how will they survive each other?
New