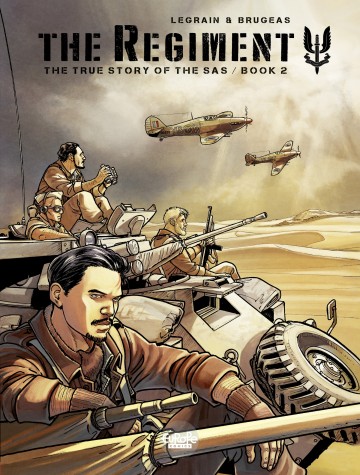 “To some British officers, we didn’t rate higher than terrorists. True, our methods bore a passing resemblance. But our actions had but a single goal: to spare our people’s blood, prevent British soldiers from being bombed or an RAF pilot from going down in flames”. The SAS’s motto: Who dares win! But the price to pay was high, as, friend or foe, anything that came from the sky was indiscriminatingly wiping everyone out on the ground. The explosives the SAS invented had a crucial tendency to set off a tad too early even in the slightly cooler temperature of the night. The enemy also adapted to the airfield attacks, making the SAS missions increasingly dangerous. As casualties rose, recruitment became unavoidable: French paratroopers came in handy. And all had to deal with loss, grief, denial and obsession. ***** With this second book, Vincent Brugeas and Thomas Legrain explore further and deliver an interesting account of the SAS saga during WWII, showing the strength of character of such men, the incredible challenges they were facing as well, their spirit of sacrifice and their hopes as men. The illustrations really give credits to the beauty of the desert, the tension and the dangerousness of the situation. The colours are simply beautiful.. A great storytelling.

For the SAS, the time has come for the first victories, but the price to pay remains terribly high. After the disaster that was their first mission, the SAS refused to give up, and their second wave of raids proved a powerful validation of the concept behind their unit. Unfortunately, they still have many enemies at headquarters, and now they must capitalize on their success. While they lack neither daring nor imagination, they will have to contend with an enemy that knows how to adapt, and learn to live with the terrible human cost of the war...

Read the album
Add to cart
Added to your cart
V.3 - The Regiment
(0)
$5.99
Despite the heroic efforts of L Detachment, the unit's victories haven't managed to stop the advance of the German war machine. Soon, Rommel is at the gates of Egypt, and losses begin to mount among David Stirling and Paddy Mayne's men. In the end, they will have to reinvent themselves and give everything they've got to push back the Desert Fox and earn their name at last: The Special Air Service!
eazyComics

Read the album
Add to cart
Added to your cart
V.3 - Ira Dei
(0)
$5.99
The Normans have their Byzantine enemies on the run. After being forced to cede Sicily, the Basileus is resorts to reinstating his formerly disgraced Strategos, Maniakis, to stem the Norman conquest. Caught up in these political machinations are a pair of warlords: Robert, a former Norman duke, and Harald, leader of the fierce and feared Varangians. Their friendship, forged in the heat of battle, now falters in peacetime. Robert questions his own quest for vengeance, while Harald mistrusts his advisor's seeming lack of resolve. New loves are born and old ones rekindled. Meanwhile, the Pope schemes from Rome, dispatching spies and assassins...