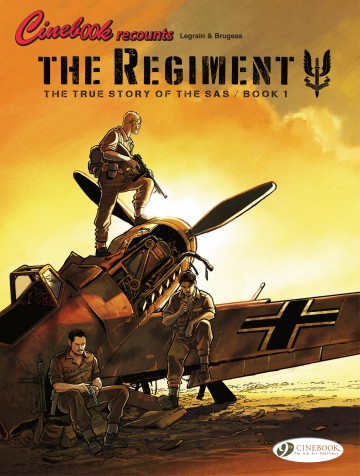 If you're either a fan of history or simply love a comic involving very big irish men called paddy shooting Nazis, The Regiment could be the right comic for you. Written and illustrated by Vincent Brugeas the comic revolves around the forming and the creation of the British SAS which you may know from either pop culture or current events are an elite commando unit in the British military. Taking place in north Africa during the world war two the story revolves around the unit's early endeavours in the war while introducing us to the men who created and led the unit. I can't speak to the accuracy of the characters personality but everything from the dates and names right down to the equipment being used is historically accurate, Hench why if you have any interest in this era of history this may be a great read for you. Clocking in at only 64 pages the comic throws you right into the story without much world building aside from the informative timeline and summary of world events at the back of the comic. Apart from one Australian officer by the name of Jock I can't say I was drawn to any of the cast, yet I did find the storyline entertaining enough that I finished it in one sitting. While I don’t think anyone would say that the artwork is the best that they have seen I think every panel had very good detail and colour while fitting in with the overall theme of the comic. Overall, I would recommend The Regiment to anyone interested in the genre and I will be adding volume 2 and future instalments to my library. Rating 4 out of 5 Stars

“The SAS is an elite unit, forged in the desert through direct contact with the enemy. Your memoir writers and assorted armchair generals love this sort of pedantic declaration. But despite my Oxford education, I can’t stand this sort of horseshit. We created the SAS because we were young, reckless, and quite likely entirely crackers.”, David Stirling. Nutters, but arguably the best officers in the whole British Army. The mission is simple: sabotage, independence and fight like real commandos. What’s not to like? Created in June 1941, as Rommel, The Desert Fox, and the Afrika Korps threatened Egypt, the SAS was imposed upon doubtful officers as a fix to the dire struggle for air superiority. Isn’t “a time for peril also a time for courage”? The SAS first breakthrough was to find the right yield-to-mass ratio for bombs; in short, the right bombs to plant underneath plane wings, that even Royal engineers thought impossible. The Allies were also planning to retake Tobruk; alongside the Long Range Desert Group, made up of New-Zealanders, Australians, Rhodesians and Afrikaners, the SAS took up their first grand mission, which ended up in far too many deaths. But the SAS never concedes defeat. “Those men are dangerous. They must be eliminated” will later say Hitler about them.

1941. Almost all of Europe is under the Nazi heel. Great Britain still holds out, but the situation worsens with every passing day. And in North Africa, gateway to the Middle East and its immense oil reserves, Rommel now threatens Egypt, keystone of British defences. In those desperate times, three men (David Stirling, Blair Mayne and ‘Jock’ Lewes), three unconventional officers, band together to create a small, elite unit that will become a military legend: the SAS.

Continue summary
The Regiment- Volume 1 - The Regiment - The True Story of the SAS Book 1 - Vincent Brugeas - to read online on izneo or download on your iOS and Android tablet or smartphone.
New

Read the album
Add to cart
Added to your cart
V.3 - The Regiment
(1)
$5.99
Despite the heroic efforts of L Detachment, the unit’s victories haven’t managed to stop the advance of the German war machine. Soon, Rommel is at the gates of Egypt, and losses mount among David Stirling and Paddy Mayne’s men – some crueller than others. In the end, they will have to reinvent themselves and give everything to push back the Desert Fox and earn their name at last: The Special Air Service!

Read the album
Add to cart
Added to your cart
V.1 - The Regiment
(4)
$8.99
All about Lucky Luke!
All about Europe's favorite cowboy!

The Regiment- Volume 1 - The Regiment - The True Story of the SAS Book 1 - Vincent Brugeas - to read online on izneo or download on your iOS and Android tablet or smartphone.
eazyComics

Read the album
Add to cart
Added to your cart
V.8 - Sisco
(3)
$5.99
As ever with Sisco, it's a case of "out of the frying pan, into the fire." Having escaped (literally) from charges of conspiring with the Indian Secret Service, he finds himself being used as a scapegoat by another country's agents. But who is it this time? The trail leads to his opposite number in the Internal Security Service—and there's no love lost between them. There's little doubt Sisco will save the day once more, but will his unorthodox methods meet with official approval this time? It's about as likely as rain in the desert...
eazyComics