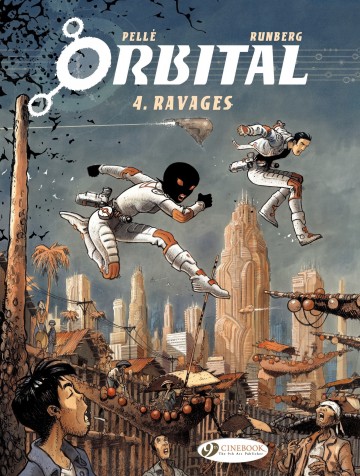 The unexplained deaths in the mangrove have not deterred authorities: The ceremonies will go on as planned in Kuala Lumpur, despite Mezoke’s resistance and growing disagreement with Caleb. But the official optimism is soon dampened by news of further destruction, closer to the city. And when Nina and Angus return with the identity of the killer, an old enemy of the Confederation, the agents will be forced to act in desperation—and, maybe, to pay the ultimate price.

This digital comic is available in english version. The following reading modes are available with the izneo reader:
Orbital- Volume 4 - Ravages - Sylvain Runberg - to read online on izneo or download on your iOS and Android tablet or smartphone.
eazyComics

Read the album
Add to cart
Added to your cart
V.8 - Orbital
(0)
$8.99
It’s clear now: the Neuronomes are not attacking the Confederation, but rather are the victims of a mysterious aggressor, and they explode when they die. They did, however, take up positions near large population centres, threatening to take thousands of lives with them when they go in order to pressure Confederate authorities – who had once massacred them – into helping them. Unsurprisingly, Caleb, Mezoke and Angus are chosen to go to the Neuronomes’ home planet and neutralise the unknown threat.
eazyComics

Orbital- Volume 4 - Ravages - Sylvain Runberg - to read online on izneo or download on your iOS and Android tablet or smartphone.

Read the album
Add to cart
Added to your cart
C.1 - The Cimmerian - People of the Black Circle
(0)
$3.99
In the kingdom of Vendhya, the king has just died, struck down by the spells of the black prophets of Yimsha. The king’s sister, Yasmina, decides to avenge him…and contacts Conan, then chief of the Afghuli tribe. But several of Conan’s warriors have just been killed by the men of the kingdom of Vendhya, further complicating the matter. The princess thought she could use the Cimmerian, but rather it is she who will serve his interests... Sylvain Runberg and prodigious designer/illustrator Jae Kwang Park adapt one of the most ambitious and complex Conan stories of Robert E. Howard. An adventure where epic battles, witchcraft and plots mingle in a mystical and scary Orient. Where revenge is an art…

Read the album
Add to cart
Added to your cart
Motorcity
(2)
$8.99
eazyComics