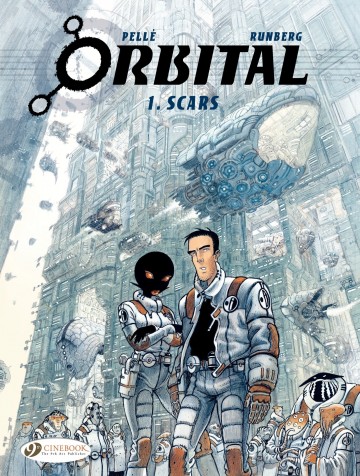 In the 23rd century, humans and Sandjarrs are allowed to join an intergalactic multiracial organisation set up 8,000 years before. The humans are seen as a belligerent, underdeveloped race by the other members of the organisation and have been kept out of it until now. The Sandjarrs had stayed out of interplanetary politics until a war between themselves and the humans broke out. Now Caleb, a human, and Mezoke, a Sandjarr, are paired up and trained as special agents to keep the intergalactic peace. This is a controversial and historic alliance, and a lot of people are watching them. Their first mission is to keep war from breaking out between humans and Javlodes on the planet Senestam.

This digital comic is available in english version. The following reading modes are available with the izneo reader:
Orbital- Volume 1 - Scars - Sylvain Runberg - to read online on izneo or download on your iOS and Android tablet or smartphone.
eazyComics

Read the album
Add to cart
Added to your cart
V.8 - Orbital
(0)
$8.99
It’s clear now: the Neuronomes are not attacking the Confederation, but rather are the victims of a mysterious aggressor, and they explode when they die. They did, however, take up positions near large population centres, threatening to take thousands of lives with them when they go in order to pressure Confederate authorities – who had once massacred them – into helping them. Unsurprisingly, Caleb, Mezoke and Angus are chosen to go to the Neuronomes’ home planet and neutralise the unknown threat.
eazyComics

Read the album
Add to cart
Added to your cart
V.1 - Orbital
(12)
$8.99
All about Lucky Luke!
All about Europe's favorite cowboy!

Orbital- Volume 1 - Scars - Sylvain Runberg - to read online on izneo or download on your iOS and Android tablet or smartphone.

Read the album
Add to cart
Added to your cart
C.3 - The Cimmerian - People of the Black Circle
(0)
$3.99
Conan must battle the Black Seers of Mount Yimsha in order to save the captive Princess Yasmina. But the seers and their master are powerful wizards with dark, destructive magic at their disposal. It will take every trick in the book, and maybe a little luck, for the Cimmerian to succeed…

Read the album
Add to cart
Added to your cart
Sukeban Turbo
(0)
$7.99
eazyComics