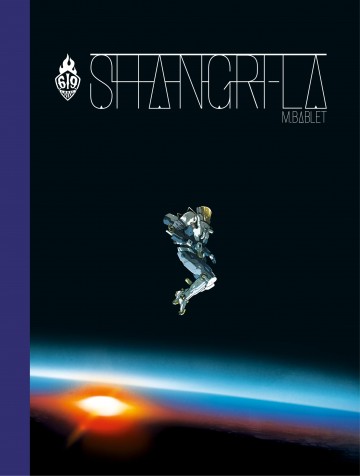 In a faraway future a few hundred years from now, humanity lives in a space station far from Earth. The station is not ruled by a government, but by a multinational corporation that everyone seems to almost worship. In appearance, the station’s inhabitants seem to be content with this “perfect society”. In this context, men want to push their own limits and become the equals of the gods themselves. And through the implementation of a program intended to create life from nothing on one of the most hospitable regions of Titan, Shangri- La, they intend to rewrite “Genesis” their own way. Meanwhile, a hero is sent to investigate the mysterious explosions that have occurred in some of the laboratory stations that have been studying this process of creating life “from nothing.”

This digital comic is available in english version. The following reading modes are available with the izneo reader:
Discover our 2021 Eisner Award Nominees!

SHANGRI-LA- Volume 1 - Shangri-La - Mathieu Bablet - to read online on izneo or download on your iOS and Android tablet or smartphone.
eazyComics

Read the album
V.1 - MFKZ
(3)
Angelino, a young loser like thousands of others in Dark Meat City, lives in a squalid hotel room in the Latin Quarter of Rios Rosas with his buddy Vinz. His days are spent between monotonous channel-surfing and working at the occasional odd job. Luckily, the Mexican wrestling matches he loves so much are on TV. From dead-end jobs to metaphysical discussions under starry skies with his buddy, his life slowly ticks by, until a seemingly banal scooter accident changes everything. Angelino suddenly finds himself in the middle of a hurricane of unimaginable trouble, involving heavily-armed men in black, gangs of all kinds, Mexican wrestler vigilantes, and even depraved cosmic entities with shadowy intentions!

Read the album
Add to cart
Added to your cart
Doggybags - Wintekowa
(0)
$2.99