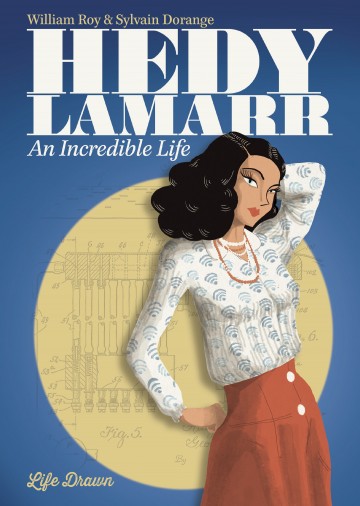 If you're a fan of the golden era of movies, this is one novel I'd totally recommend! I very much enjoyed reading this novel! Great story, cool artwork and loaded with history! Since Hollywood is barely able to generate even one worthwhile movie a year anymore, several months ago I started watching movies from the 20's thru the 60's. Bogart, Lancaster, Davis, Hepburn, Hayworth, Lemmon and of course Lamarr. At the same time I've begun to look into their biographies, where they came from and how they got to where they got to. It was then that I learned about Hedys' ingenuity and inventions, the frequency shifting torpedo, and the ignorance of the powers that be in ignoring the work she and George Antheil had done. I think it's awesome that their work is so foundational in our society today. She was always more than just a pretty face. Thank you Hedy & George!

From her native Austria to the limelight of Hollywood, Hedy Lamarr was constantly bombarded with societal limitations and personal obstacles—including her own beauty. Only through courage, ambition, and intellect would she rise to become both a cultural icon and an unparalleled inventor whose creations would alter the course of history. Creators William Roy and Sylvain Dorange use the graphic novel medium to recount the biography of a genius inventor who happened to be “The Most Beautiful Woman in the World”.

Read the album
Add to cart
Added to your cart
Digital Comic
(0)
$11.99
From unsuccessful attempts to repeated failures, the two newlyweds face a menacing foe: sterility. Together, they embark on the confusing journey that is in vitro fertilization. Haunted by the hyperbole of WebMD and the guilt of infertility, Guillaume experiences the daily embarrassment of sperm donations, tests with dreaded results and endless consultations--not to mention the specter of his own estranged father who reappears suddenly in his life... With realistic, self-effacing charm, William Roy humbly and accurately shares a deeply human experience that is propelled by unshakable hope.
Close