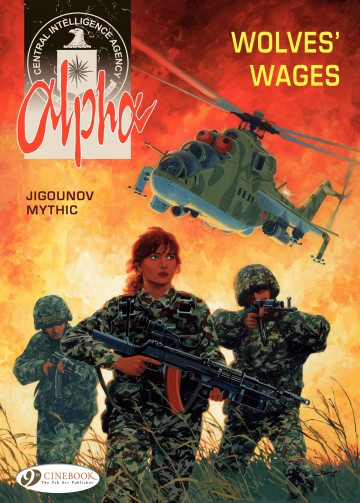 The fall of the Berlin wall and the dismantling of the Soviet Empire changed the world, engendered new rivalries and started a new kind of Cold War. From Paris to Moscow, from Berlin to The Hague to New York, mafia hotshots, ex-members of the nomenklatura, powerful financial and industrial organisations, spies from all sides: all of these influential figures are involved in a political and economical warfare and the stakes are high.

Read the album
Add to cart
Added to your cart
V.4 - Alpha
(3)
$5.99
The Cold War: the golden age of American and Soviet spies, a time when everything was clear-cut and simple. We’re the good guys, they’re the bad guys. Nowadays, CIA operatives like Alpha often feel more like commercial envoys than secret agents. When bodies start to drop in Washington, though, a boring mission playing tourist guide to a Russian delegation suddenly becomes much more dangerous. An old bogeyman from the Cold War, long thought dead, has reappeared…
eazyComics

Read the album
Add to cart
Added to your cart
V.23 - XIII
(2)
$5.99
Still with Annika, Jason McLane has the documents his godfather left for him to find in the Netherlands deciphered. Once translated, the text offers revelations of breathtaking importance – enough to change the geopolitical map for ever. But the killers sent by the Mayflower Foundation are still after them, while in Afghanistan, Jones and Carrington’s situation goes from bad to worse. XIII will have to be on his best game to sort it all out – but at what price?
eazyComics