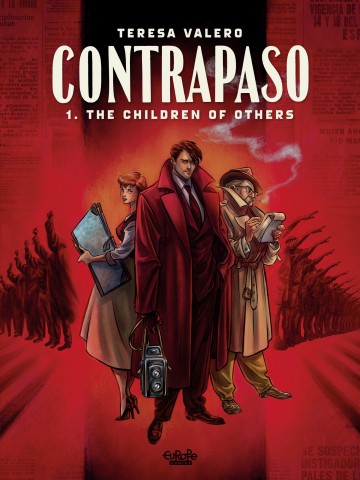 Volume : 1 - Contrapaso 1. The Children of Others

"We needed heroes, but all we got were murderers." "Heroes don't exist, they are made after the fact, after the horror, to escape the shame." - And yet there are real heroes in "Contrapaso" - there is Emilio, the old reporter who writes the truth even though he knows that his articles will never be published, there is Leon, the young reporter, adopted son of one of Franco’s generals, who returns from Paris and throws himself headfirst into an investigation that is more dangerous than he imagines, there is Paloma, an artist, a fiercely independent girl, there is Martina, the former nurse who twenty years later is still helping her childhood friend, there is Carlos, a renowned psychiatrist who disappeared only to become a doctor for the poor, there is Father Paramo who builds shacks for immigrants... "Contrapaso" is a police investigation led by reporters (because the police are too busy finding scapegoats). It’s the enigma of a serial killer in Franco's Spain, a country where such excesses did not officially exist. And it’s a descent into the hell of the psychiatric institutes of those times, where they experimented on the undesirable, destroying their past, and the maternity wards where their children were stolen, destroying their future. A difficult subject, masterfully written and drawn by Teresa Valero, whose soft, even jovial graphics are violently opposed to the horrors she tells - but it works, this contrast gives even more impact to the story. A gripping thriller that tells a breathtaking story, that educates at the same time, and that has the courage to look closely at the atrocities of Franco's dictatorship, without lowering its eyes. I'm (obviously…) waiting for the sequel.

Madrid, winter of 1956. Franco's fascist dictatorship controls the press and maintains the fiction of an idyllic nation. Faced with the Regime's attempts to cover up the country's most sordid crimes, two journalists from the crime beat, the jaded veteran Emilio Sanz and the young and intrepid Léon Lenoir, seek to reveal the truth. Confronted by a wave of unexplained murders, the duo sets out to uncover the dark secret connecting them, buried in a cruel past. Brilliantly written and illustrated by Teresa Valero, Sanz and Lenoir's investigation plunges us headfirst into an era and society as dark and as violent as it is full of hope. A bracing journalistic thriller revealing the lengths the Francoist regime was willing to go to in its attempts to stifle any form of dissent.

Contrapaso- Volume 1 - Contrapaso 1. The Children of Others - Valero Teresa - to read online on izneo or download on your iOS and Android tablet or smartphone.

Read the album
Add to cart
Added to your cart
V.1 - Gentlemind
(1)
$8.99
New York, 1940. Navit, a young, penniless singer, inherits ownership of an old-fashioned girlie magazine: "Gentlemind." Combative, intelligent, and audacious, she sets herself up as the publication's new director and takes on the immense challenge of turning it into a modern magazine. Haunted by the memory of her lover who left for the front lines of Europe, she must confront the realities of an American society that is in its golden years, but remains highly patriarchal. A deeply touching story spanning three decades, relating the American dream from a woman's perspective!"Gentlemind is one of the comics to read this year. It straddles both the Europe and America of the 1940s, with its setting and tone being New York City, while its feel is definitely European. Juan Díaz Canales & Teresa Valero capture something of the spirit of those times and their story has a soul of its own, which Lapone's art animates to another level." The Comics Journal
Close