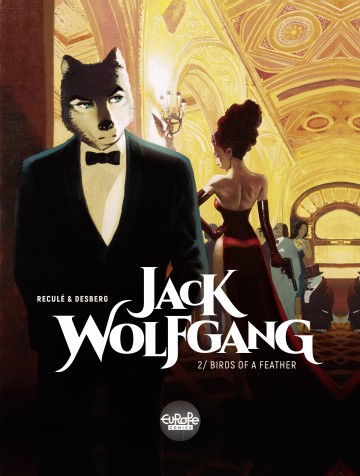 Jack Wolfgang, vol 2 is written by Stephen Desberg and drawn by Henri Reculé, with Kattrin as colorist. It continues the adventures of Jack Wolfgang, a secret agent posing as a food critic. This time he takes on a megalomaniac businessman who's obsessed with winning the Nobel prize. I felt like this was a strong follow-up to the first volume, which I enjoyed a lot. The story doesn't quite flow as smoothly as in the previous installment, so it comes up a little bit short in comparison. But the strengths of the series are still present. It's action-packed and there are no dull moments. The premise of humans and animals mixed together also gives the story an extra twist. To tell the story without that element wouldn't have been as effective. Furthermore, Henri Reculé really excels with the artwork. It's a treat seeing him depict the different animals and locations, this story really gives him an opportunity to shine. Reculé has a fluent style that suits the brisk pace of the storytelling. Kattrin also deserves praise for the beautiful and vibrant colors. The creators have definitely found a concept that works with this series. It's a fun ride that really scores high as far as entertainment value is concerned.

The richest pigeon in the world, Lord Beckett, has an ego that needs feeding, and birdseed won't suffice. Even the highest of academic honors won't be enough. Jack Wolfgang, food critic and CIA agent, must stop the mad pigeon's bird-brained scheme to rule the planet, but to do so, he'll have to join up with some of the world's most dangerous assassins. The clock is ticking, and if he doesn't complete his mission in time, the consequences will be beastly: he'll miss his date with a lovely panther in Oslo.

Read the album
Add to cart
Added to your cart
V.3 - Jack Wolfgang
(1)
$5.99
Jack had been looking forward to a weekend getaway in Krakow with his girlfriend, Antoinette. Fine dining, Christmas markets, romance in a swanky hotel—life can be sweet sometimes. But when your love is a professional assassin, things can also quickly go sour. For Antoinette, it was a working holiday: she gets her man, a nasty billionaire at the head of a secret organization, but loses Jack in the process. There's no time for tears—at least not yet—as the billionaire's murder is linked to the death of an American dog in Cairo, an art gallery in San Diego, and a perverse secret society in London. Animals may have achieved the same heights of intelligence as humans, but they also share in their capacity for cruelty—unless Jack and Antoinette have their say.

Read the album
Add to cart
Added to your cart
V.9 - Cassio
(1)
$5.99 $2.99
In this riveting series finale, Tesio, the prophesied child of two ancient Egyptian deities, has recovered his mother's body from the Louvre and wrested the fourth canopic jar from the convent at Monsarmat, leaving a bloody trail of corpses in his wake. Only one man stands any chance of stopping his mad rise to power: his half-brother Cassio. But since Tesio's poison has stripped him of his immortality, Cassio's going to need a lot of help. From the beautiful young archeologist Ornella Grazzi; from his recently resurrected mother, the goddess Armahl; and from the unlikeliest of sources: his mortal enemy, the monstrous Reptah.
eazyComics