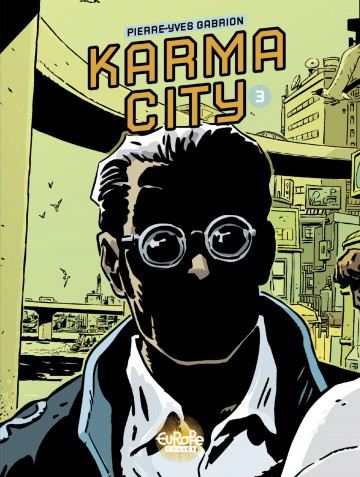 Karma City is a town of virtue governed by the universal laws of karma and where public interest primes. Emma List, a paleontology researcher, presents herself at the gates of the "white zone" of the capital city. She is authorized entry despite her negative karma level. A few minutes later she has a stroke and dies in a car crash. What initially appears to be a routine case for agents Cooper, Napoli, and Asuka soon transforms into a wide-ranging investigation. For Emma List had moved into the grey zone to pursue proof that pre-karmic societies once existed.

This digital comic is available in english version. The following reading modes are available with the izneo reader:
Karma City- Volume 1 - Karma City #3 - Gabrion - to read online on izneo or download on your iOS and Android tablet or smartphone.

Read the album
Add to cart
Added to your cart
C.12 - Karma City
(2)
$2.99
Major Cooper, Asuka, and Napoli have finally succeeded in dismantling the dark network of stolen antiquities. But when the judge inexplicably takes the guilty party's defense before dying of a stroke, the three investigators understand that the high spheres of society are affected by a conspiracy of unsuspected magnitude. They begin a race against the clock to join the abandoned networks of the city in an attempt to survive and to secretly pursue their mission as would-be guardians of humanity's free will. Fortunately, the alchemists--protectors of a new version of the city's original quantic computer intelligence--come to their aid. However, their artificial intelligence has a conscience and with it, an immense amount of power. Who will be the master and who will be the slave?

Read the album
Add to cart
Added to your cart
C.1 - Karma City
(8)
$2.99
Become a super reader
Write reviews and get comics for free!