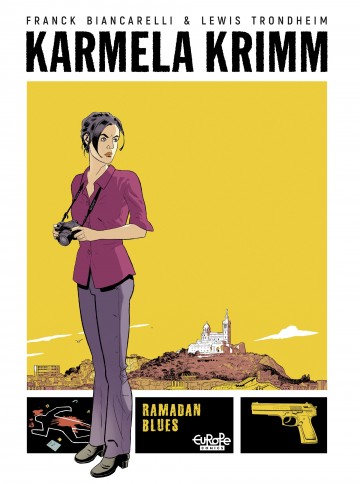 Karmela Krimm is written by Lewis Trondheim, with artwork by Franck Biancarelli, and colors by Walter. Karmela is a private investigator who gets hired to solve the murder of a big mafia boss, it turns out to be a difficult task. I wasn't totally satisfied with this book. It doesn't really get interesting until the very end. The story goes through the motions, but rarely puts forward something exciting. Unfortunately, the characters aren't very memorable either. The dialogue between Karmela and her assigned bodyguard feels forced and stilted. Their banter mostly falls flat rather than being clever. The book is saved to some extent by a decent ending. The conclusion of the story comes together quite nicely. The artwork is also good. Biancarelli has a nice style. It's stylish and expressive, with vivid colors by Walter. Karmela Krimm comes up short on too many levels unfortunately, even though the ending and the artwork are bright spots.

Karmela Krimm was the most promising young detective on the Marseille police force until she volunteered to take the fall for an operation that went sideways. When Karmela lost her job and became a private investigator, her ideals went up in smoke along with her badge. Perhaps for the better: in the troubled waters she now navigates, ideals are a dangerous luxury.

Continue summary
All about Lucky Luke!
All about Europe's favorite cowboy!

Read the album
Add to cart
Added to your cart
V.1 - Omni-Visibilis
(0)
$11.99
Hervé's awkward, irritating, and maybe a bit OCD, but in the end, he's a normal guy. He has a job, his buddies, a girlfriend, and a mother who keeps close tabs on him. One particular day starts out just like any other, but on his way to work, he quickly realizes that things are anything but normal. Every person he crosses paths with not only seems to know him, but sees what he sees, and hears what he hears. And he soon discovers that everyone else on Earth is connected with him too. So begins a day unlike any other, with Hervé cast out of anonymity and into a nightmare of confusion and danger.

Read the album
Add to cart
Added to your cart
Venezia Venezia
(1)
$8.99

Read the album
Add to cart
Added to your cart
V.2 - The Marvelous Adventures of McConey
(0)
$5.99

Read the album
Add to cart
Added to your cart
V.1 - The Marvelous Adventures of McConey
(0)
$5.99