"Peter is a former math student. Forced to abandon his studies in order to care for his father -- a professor who has since passed away -- Peter throws himself wholeheartedly into boxing, despite his ultimately pacifist natire. His career as an amateur boxer is going so well that he begins to harbor hopes of turning professional. But Peter lives alone, and hides his boxing activities from his friends, just as he used to hide them from his father, for fear of their reactions. TJ, Peter's close friend since their college days, works in a bank. He's pretty good at what he does and is popular with women. But he has one vice: gambling. It's a secret he conceals, so as not to frighten his new girlfriend, Anne. A dangerous game -- because TJ sometimes bets very large sums of money, with very untrustworthy people... Inevitably, one day, he makes too big a wager... Anne tells everyone that she's a teacher. But Anne has a darker secret than either of the others: her teaching job is just a cover for her real work as a professional killer. And an organization is about to make her an offer she can't refuse... How long can these little games continue? Unusually perceptive, this trilogy unfolds in three acts around three characters and their individual perspectives, each one with something big to hide..." 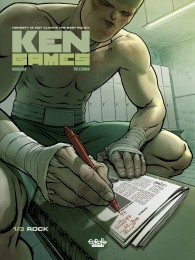 This first volume of the Ken Games series gives us a profile of Peter Fermat (aka Rock), a young man who, like each of the three main characters, is leading a double life. His story opens with a boxing match which has a nasty ending for the up-and-coming boxer, despite his victory. It's not long before we discover that Rock is not only striving to make it in the boxing world, but is also something of a mathematical genius, which is how he met his best friend, TJ. For the first time in all their years of friendship, TJ introduces Rock to a girlfriend, the lovely Anne. Anne and Rock soon establish a bond of trust when Rock discovers that Anne too is living a double life, even though Anne's secret is not exactly what she leads Rock to believe. This is just the beginning of the tangled web of lies and deception that gets ever more convoluted as the series goes on... 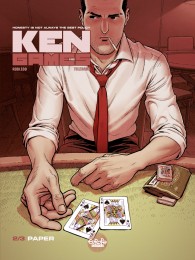 This is the second round of this hard-hitting series centered on three friends, all with something to hide. This time, we're zooming in on Mr. TJ Paper, who passes himself off as a banker, while he's actually raking it in on the gambling scene. And now he's got himself into a televised poker tournament, but will his lucky streak see him through a competition of this level? In the meantime, TJ's girlfriend, Anne and his best friend, Rock, run into each other again in even more surprising circumstances, and the bond they established previously strengthens even further, perhaps too far... to the extent that Rock even starts making big sacrifices in his own life. And all the while, there's Louviers, the love of Anne's life, lurking in the background, a constant reminder of the danger and violence she wants to leave behind. 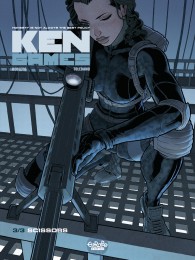 This third album concludes the Machiavellian trilogy in which every character seems to have pretty good (or bad) reasons to hide the truth from those they love. This time, it's Anne we're focusing on. She talks us through her childhood, her relationship with the enigmatic but dangerous Louviers, the first steps towards becoming an assassin, and the strange crossovers between writing and killing. Meanwhile, TJ goes off the rails after his discovery of Anne's true identity at a decisive moment in their relationship, and Rock achieves his greatest victory, but it's drenched in tragedy. As Anne says, "sometimes you have to get your hands dirty to get what you want." 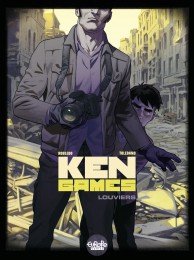 This prequel to the Ken Games series gives us a little more insight into the enigmatic Louviers, Anne's childhood sweetheart and partner-in-crime. Louviers is at the end of his tether. He blows up the apartment he shares with Anne and takes flight. After this incident, he accepts a contract in a war zone. Once he's there, he finds himself struggling as much with the suspiciously vague information on his target as he does understanding the language. Consumed by doubt, he falls victim to the ghosts of the past and his eternal, impossible love for Anne begins to devour him...