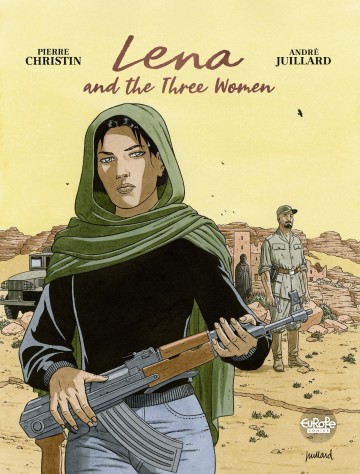 Lena thought she was done with spies. She has met Rob and Danny who are truly part of her life, acknowledging they will never be her husband and son killed in a bombing in Khartoum. But the hydra of international terrorism never dies, old causes are recycled to serve new masters, and always, lives can and must be saved. Moreover, Lena finds herself unable to simply resume a quiet and ordinary life. She is asked to infiltrate an Islamist terrorist movement financed by Saudis and planning a suicide bombing in Paris. The publicity of young and female martyrs features high on the terrorist agenda. Lena’s mission is to coach the young women on Western lifestyle, in order to avoid drawing unnecessary attention before they to blow themselves up in a market. Halima, the Sweet one, who comes from a fairly well-known mullah family. So young in her black hijab. Alhem, the Dream with the daring step of a fighter and a hard look in her eyes. Souad, the Well-being, with a dazzling laugh but whose family was exterminated by the Algerian government forces. Lena feels a special bond with the latter, perhaps the fact she has nothing left to lose. The theological teachings are provided by a preacher: one must not take the life of another, except for a just cause; killing children is possible as they are directly rewarded in the afterlife; killing non-combatants is allowed in case of collaboration with the enemy; concealing religion is recommended in the context of jihad; female martyrs must have the consent of parents or spouses. But it so happens that the faith of the youngest girls ends up being somewhat shaky. Lena then proposes to carry out the attack alone. ***** The narration of the preparation and of the motives for such an act is the real strength of this second volume on international terrorism by André Juillard and Pierre Christin. To have chosen women to commit the irreparable and another to try to save these martyrs is not insignificant. Lena comes out of the cycle of revenge to plunge into that of duty and heroism, thus gaining a certain personal freedom, and also alleviating the pain caused by the bombing that had taken the two men in her life. From being an indirect victim of terrorism, she becomes a survivor.

Lena, vol 2 is written by Pierre Christin, with artwork by André Juillard. This time Lena is recruited to infiltrate a group that's planning a terror attack on Paris. I felt this volume had a lot of the same weaknesses as the first one, but less of its strengths. It starts off promising, but soon gets excessively wordy and the storytelling slows down significantly. A bit less “tell" and a lot more “show" would have been nice. Maybe Christins literary ambitions got the better of him, and the usual fluidity of the comics medium was lost in the process. The first volume also had a slow build-up, but it benefited from a clever conclusion. Unfortunately, the ending of this book was less inspired. It felt a bit too straightforward and unsurprising. Lena is still an interesting character, she's believable and depicted in a mature way. Andre Juillards artwork also continues to impress. His detailed, yet minimalistic, style works from start to finish. Everything looks good in his rendition: people, vehicle, buildings. All in all, this volume was a bit of a misfire. The story doesn't justify the heavy load it puts on the reader. I think there's still hope for this series though, especially with the continued performances by André Juillard.

Lena thought she'd paid her dues to the French secret service. She'd gone undercover as their courier in order to avenge her son and husband, both killed in a terrorist attack. And now she has a new life in Australia. A new family. So why does she still feel so hollow inside? Lena finds herself reluctantly drawn back into the world of international espionage, this time as a tutor to Islamist suicide bombers at a remote training camp in the Georgian desert. Three girls, in each of whom she sees something of herself. But will it be enough to bring her to save them?

Continue summary
Lena- Volume 2 - Lena 2. The Three Women - Juillard André - to read online on izneo or download on your iOS and Android tablet or smartphone.

Read the album
Add to cart
Added to your cart
V.3 - Lena
(3)
$5.99
A meeting of elite diplomats. A snowy resort in an undisclosed location. A secure communications room staffed by private security. Lena's latest adventure finds her ostensibly heading a small hospitality staff that caters to the needs of VIPs attending a top-secret summit. What better way to suss out secrets than by blending into the woodwork? In this locked-room atmosphere, egos clash and history outs its old grudges. For the issue at stake is none other than the fate of the Middle East, again to be divided by meddling powers. And these days of routine, ennui, luxury, and leisure may hide a more insidious threat...

Read the album
Add to cart
Added to your cart
V.1 - Lena
(3)
$5.99
All about Lucky Luke!
All about Europe's favorite cowboy!

Lena- Volume 2 - Lena 2. The Three Women - Juillard André - to read online on izneo or download on your iOS and Android tablet or smartphone.

Read the album
Add to cart
Added to your cart
V.3 - The Hardy Agency
(1)
$5.99
Unsolved cases come home to roost in Edith Hardy's latest caper, rounding off the first trilogy of the detective's adventures. When secret services in France and America start pulling strings—not to mention the machinations of a certain pharmaceutical industrialist—Edith winds up behind the Iron Curtain, in Moscow! But is she there to recover the legacy of state painter Alexis Limonovich... or save naive young chemist Antoine Dubreuil from being manipulated? Meanwhile, just what skullduggery is Edith's enterprising assistant Victor up to with an art forger, a carnival performer, his bear, and a midnight break-in? One thing's for sure: it all adds up to classy intrigue!