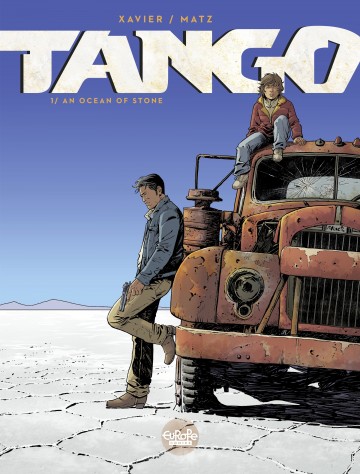 He used to play a dangerous game, running cash for the mob. Now he calls himself Tango, and he lives in a little village rising like a small island out of the rocky sea of the Andes. He's made a few friends since he arrived, with whom he's got a lot in common: they've all got secrets from their past, and they're not exactly who they say they are. One by one, their secrets are revealed in a storm of violence when old friends come knocking, demanding past debts be paid. High up in the Bolivian hills, a mountain community is once again upended by the arrival of strangers and the troubles they seem to bring with them."The Tango series is perfectly escapist comics, with plenty of welcome cinematic parallels." Women Write About Comics"The first thing that strikes you in this comic is the art. Rolling vistas of mountains and it all looks amazing. This scenery could be stills from a western!" Three Million Tears

This digital comic is available in english version. The following reading modes are available with the izneo reader:
Tango- Volume 1 - Tango 1. An Ocean of Stone - Matz - to read online on izneo or download on your iOS and Android tablet or smartphone.

Read the album
Add to cart
Added to your cart
V.3 - Tango
(4)
$8.99
For our two fugitives turned sailors, Tango and Mario, the next stop on their voyage around the West Indies is beautiful Curaçao. There they'll meet Charles, a charming Frenchman who's clearly hiding something. The three go on together to Panama City, and it's not long before Charles catches the attention of the American authorities. And they're not the only ones who want to get their hands on this expat on the run... Bullets will fly, with Tango once more caught in the middle."The Tango series is perfectly escapist comics, with plenty of welcome cinematic parallels." Women Write About Comics

Read the album
Add to cart
Added to your cart
V.1 - Tango
(8)
$8.99
Become a super reader
Write reviews and get comics for free!

Tango- Volume 1 - Tango 1. An Ocean of Stone - Matz - to read online on izneo or download on your iOS and Android tablet or smartphone.

Read the album
Add to cart
Added to your cart
V.2 - Crusade
(0)
$5.99
Gauthier of Flanders is in the city of Acre in the Levant, awaiting the arrival of his sister Sybille—a woman with a scandalous reputation whom he hasn't seen in many years. Meanwhile, the Assassins, working for the djinn Ottar Benk, are still after him, convinced that he is in possession of the dangerous "treasure" that Benk covets. To force the knight to show himself, they begin to foment trouble in the city, held by the Christians... Volume 2 of the Nomad Cycle.

Read the album
Add to cart
Added to your cart
The Complete The Killer
(0)
$39.99